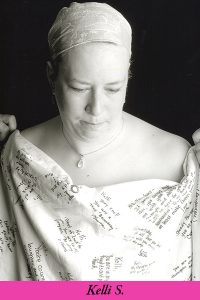 I was 32 years old and had just come home from a volleyball tournament. As I was changing out of my clothes for the shower, my forearm brushed a hard lump in my left breast. Checking again frantically with both hands, yup, yes, that is definitely something that according to any person’s standards would be classified as a LUMP. Two days later, I had 13 mammograms, an ultrasound, a needle biopsy of my underarm, a core biopsy of the walnut-sized lump and a diagnosis under my belt. Not the way I wanted to spend my Easter holidays.

I celebrated my 33rd birthday hairless, wiped out from chemotherapy, but with one of the biggest smiles on my face as I realized how good it was to be ALIVE. Friends and family had created a circle of protection around me. My closes friends held a “booby shower” for me the week of my mastectomies. Each person had secretly gifted me a camisole and presented me with a lit candle and a stone with an inspirational word on it. The nurses at the Pluta Cancer Center had shown me it was OK to laugh with a big needle sticking out of my chest. My cats begged to be petted as I slept in my bathtub after a bath, too exhausted to crawl the 10 feet to my bed. I used my feelings of anger and frustration to write a humorous book on undergoing chemotherapy. That summer my cancer treatment continued as I under went a bilateral mastectomy, followed by another 12 weeks of chemotherapy and then 6 weeks of radiation. I returned to work that winter determined to heal and put it all behind me. Yeah! I could do anything!

This past spring, at age 34, I was having some hip pain and a routine bone scan led to multiple x-rays and another biopsy to confirm that the cancer had spread to the bones. There were areas in my hips, breastbone, and spine that were akin to a piece of Swiss cheese. I hadn’t planned on getting osteoporosis until I was double my age, and it didn’t help that the majority of breast cancer literature featured colorful pictures and drawings of women with gray hair. Anything having to do with young breast cancer survivors (defined as those diagnosed under the age of 40) was full of words like “rare and aggressive” and mortality statistics. It was like, okay, I paid for my ticket to the Florida Keys, but I was only going to make it as far as some podunk town in West Virginia, if I was lucky.

(OVER)
The one huge thing that has changed since my cancer diagnosis is my set of priorities. At age 35, I find myself continually looking at the forest, at the big picture, at the whole box of chocolates instead of just one. Life is too short to sweat the small stuff. I find myself suppressing giggles at meetings, thinking, “Come ON, people, let your panties out a little!” ( Uhhh, is my boss going to read this?)

My hardest struggle has been making peace with myself. I have learned that it is OK to admit to whatever feelings I have about living with cancer, even if that includes anger, frustration and sadness. I am working on accepting that hope does not equal optimism and that if I’m ever upset or scared or lonely, it won’t count against me in the “Kelli vs. Cancer“ fight.

I now celebrate each day and I can get re-charged with the positive energy just by going to work and seeing the smiles on the kids’ faces as I teach them a new skill. I continue to be the one in my elementary school building who always has a supply of silly putty, scented markers, and sour gummy worms. And I plan on hanging around for a long, long time.