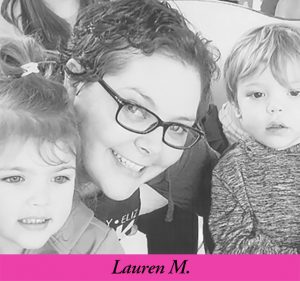 Lauren Morelle was first diagnosed at age 29 with triple negative breast cancer in 2016. She discovered the 6cm tumor while breastfeeding her son, who was then only 6 months old. Following an aggressive chemotherapy plan and double mastectomy, a lesion was discovered on her vertebrae. A CT scan and PET scan confirmed that the cancer had metastasized in her bones, and later, her brain.

More treatment followed which Lauren faced with strength and bravery, supported by her husband, Nate; her children, Arabella and Jonas; parents, Joe and Mary Beth Morelle; brothers, Joseph and Nicholas; and extended family.

Lauren’s courageous battle with breast cancer was documented in her Facebook page, Lauren vs. Cancer which she hoped would be an honest and open portrayal of the challenges faced after a cancer diagnosis. Lauren left an indelible impression on everyone she met. She was strong, funny, smart, passionate, and honest. She found joy in everything she did, but her greatest joy was time spent with her loving and devoted family.

Lauren’s beautiful spirit left this earthly world on August 30, 2017. We will continue to honor her memory and to love her “too much.”