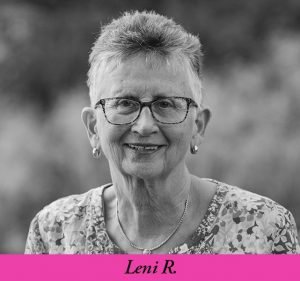 I hadn’t had a mammogram for about 22 months because I’d been following a debate between two national women’s health organizations – one saying they were needed yearly, the other said every two. So, I let it slide longer than I might have. I did set up an appointment at Rochester General, where I worked in the medical library, just to get it over with. I went during a break for my routine screening this is where my memories slide into a tangle that I can’t pick apart.

The next thing that I clearly remember was my husband’s calming presence at the biopsy. Shock was my overriding emotion and I was too fearful to form the question that Allan then asked, “From your experience, Doctor, is this cancer?” When I head the words- architectural distortion- I understood it was cancer. And the biopsy confirmed it, as did a meeting with a surgeon.

The surgeon that was recommended to me was out of town for three weeks, so I met with the first surgeon that I met. I didn’t really like him but I wanted it out yesterday, as some women may understand. In retrospect, I don’t advise this and I realized it may not have been the best decision. I had a gut feeling that I needed a mastectomy, but the provider urged a lumpectomy. Later the pathology showed the cancer was larger and margins were not clean. I never saw him professionally again.

Chemotherapy followed, specifically taxotere and cytoxin. I experienced skin issues and fatigue but minimal nausea. Expecting to lose my hair, I had most of it cut off preemptively into a mini-mohawk. I never considered a wig, on the grounds of likely itchiness, and preferred soft chemo-caps instead. They were warm in the winter, especially at bedtime!

I found a new surgeon and was able to schedule my mastectomy. Days before surgery, I received a letter from my employer, laying me off for overstaying my disability insurance. My employer was the very hospital I was receiving cancer treatment. I frantically called my surgeon, such a kind man, and he just handled it. To my relief, surgery and recovery proceeded as planned.

When considering reconstruction, I was only a candidate for an implant, so an expander was placed during the mastectomy. Partway through the process of receiving fills, I was told radiation therapy was to start immediately and continue through 28 treatments.

I found radiation to be a fascinating process where the techs were very professional and answered all my questions while ensuring my comfort. I developed bad burns and skin loss by treatment 20, and they stopped radiation after the 26th round. The implant exchange was delayed to let the effects from radiation heal, until the summer of 2020, and I was grateful it could be done.

I came to the Breast Cancer Coalition only days after my diagnosis through the recommendation of a friend that knows Holly Anderson. I attended my first Brown Bag Friday, made strong connections, and immediately felt safe.

My treatment didn’t go as smoothly as I would have liked, but every treatment story is as unique as the person. It’s not likely others will follow my same path. Cancer changed my life 180 degrees and has me on a different trajectory, possible a more satisfying one. Committee work fulfills my scientific curiosity while I serve on two Breast Cancer Coalition committees and one out of Roswell park. Like my fellow thrivers / survivors, I feel compelled to “pay it forward” and make someone else’s life a little easier.