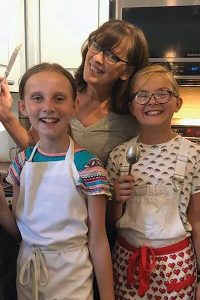 Twenty-four years of survivorship is worth celebrating.

Janet Stadt was originally diagnosed with breast cancer in 1995. While still in the hospital recovering from her mastectomy, she was introduced to the oncologist who would help see her through some dark days, and with whom she would forge a strong connection. “He always knew how to give me hope,” Janet shared when we met to talk about her experiences. On the day of her last treatment, she and her beloved oncologist shared a hug before parting.

Fast forward to September of 2018. With twenty-four disease-free years behind her, cancer was not on Janet’s radar when she began having back trouble. In fact, as a person with a metabolic bone disorder called Paget’s disease, her symptoms seemed to be in line with that condition. But when the usual approaches to treatment had no effect, Janet went for an MRI. This revealed lesions that the radiologist deemed suspicious for cancer, but Janet wasn’t convinced. “I was in disbelief,” she recalled. “I thought, ‘Oh, that’s my Paget’s disease; that’s not cancer.’”

A number of MRIs and CT scans ensued, each with uncertain but suspicious results, until a bone biopsy confirmed the diagnosis: Janet’s breast cancer had metastasized to her spine. By this time, it was April of 2019.

After receiving her diagnosis, the first phone call Janet made was to her oncologist from 1995. He currently practices in Dansville and was naturally concerned; he offered to treat Janet. After some consideration, she decided to seek – and ultimately found – a compassionate professional closer to home. “She says things that make me feel like there’s hope,” Janet affirmed. As events have unfolded, Janet has come to the happy realization that both doctors are following her case closely, which is the best-case scenario for her in terms of medical care.

Janet’s diagnosis raised tough questions for her, many of which centered on mortality. And her oncologist has listened. “She and her staff have softened that blow for me and as they’ve done that, it’s been kind of incredible what’s happened,” Janet gratefully acknowledged. With their support, she is now better able to articulate the things that scare her; questions such as “How long is this treatment going to last? And how long is the next treatment going to last? How sick am I going to get? Those are the things I’m afraid of. And that’s what [my oncology team] did for me.”
Janet’s oncology team has also empowered her to make the best choices for herself. It was her nurse practitioner who first said, “This is all your choice. All of it. Everything you do here, every pill you put in your mouth, every test you have is all your choice.”

With three compression fractures in her spine due to her disease, Janet’s mobility was initially limited. And while she doesn’t rate her pain as severe, it was real, and it presented another challenge. Fortunately, Janet had a good response to radiation treatments on her spine, which began shortly after her cancer was discovered. As her bones have begun healing, Janet’s pain has decreased and her activity level has increased.

Janet, who works out of her home as a piano teacher, has expanded her circle of friendship to embrace the members of our Common Ground group. She attends regularly. “It was a lifesaver to me,” she shared. Common Ground is a warm, supportive, and diverse group of those living with metastatic breast and gynecologic cancers; people who would not have met under other circumstances. “We’re all different kinds of people, but we’re all in the same boat on this ride,” Janet affirmed.

In fact, when the Common Ground group recently lost a beloved member, they rallied to support one another in their grief, and Janet was among them. She confessed that “When you have your own business and you control every hour you work and every person you work with, you kind of put yourself in a bubble. That way, you don’t have to come out and get hurt by people or lose people. It was important to me to come out of that bubble and understand that you don’t get that sort of deep connection, that deep love for people, unless you risk losing them.”
Without risk, there can be no gain.

Yes, twenty-four years of survivorship is a reason to celebrate. And every day that Janet continues to live, grow, think deeply, and forge lasting human connections is another day of survivorship, adding ever more reasons to celebrate. Janet’s thoughtful, honest, and uplifting contributions to our Common Ground conversations – both during and between meetings – are yet another reason to celebrate, and we are grateful for her presence in our community.