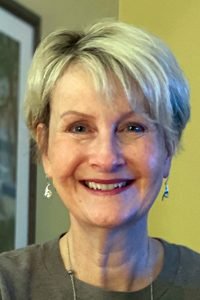 Ovarian Cancer With a Genetic Connection

I was diagnosed with ovarian cancer in April of 2017 at the age of 58. During the six months preceding my diagnosis, my “normal” seasonal allergies had begun to worsen and I suddenly found myself allergic to medications and foods I had never reacted to before. My primary care physician referred me to a new allergist who prescribed a treatment plan to help “calm everything down” and get me back to normal.

After several months of worsening allergies and no improvement with my new plan, I returned to the allergist. She proposed that sometimes an allergy ISN’T an allergy but another condition causing a reactive response. She asked if I would mind taking a CRP (C reactive protein) test to look for systemic inflammation. It wouldn’t diagnose the problem, but it could help us see if perhaps something else was going on. I took the test in early April 2017 and my results showed a high level of inflammation.

Upon receiving the CRP results, I reflected on my increasing fatigue, lack of appetite, backache, and occasional abdominal discomfort, and made an appointment with my gynecologist. After an exam and ultrasound, as well as a Cancer Antigen125 (or CA125*) blood test that yielded a reading of 2500 (normal range is 0-34), I was immediately referred to a gynecologic oncologist. Ten days later, I had a total hysterectomy with midline incision. The pathology revealed a Stage 2 grade 3 serous ovarian cancer. My allergist had saved my life.

Physically, the surgery was rough. It was a major surgery with a lengthy recovery. The biggest challenge for me was having patience with the amount of time it would take to heal. I was an active, strong, and “healthy” person up to this point. It was hard to feel “weak.”

One month following my surgery, I began six rounds (eighteen infusions) of dose dense Taxol and Carboplatin chemotherapy, administered weekly, finishing chemo in late October of that year. Chemo was no party. It started out not too badly and when it ended, I was physically and emotionally drained. As a result of chemotherapy, I have neuropathy in my feet and tinnitus in my ears. These are things I can live with, and a fair trade for the good the chemo accomplished.

After being diagnosed with ovarian cancer, current protocol is to have genetic testing. I received my testing results in June 2017 and was found to carry the BRCA1 mutation**. This was not surprising to me, as my mother was a sixteen-year breast cancer survivor and died of esophageal cancer in 2003 at the age of 66. Her first cousin is an eighteen-year ovarian cancer survivor, my maternal grandmother died from multiple myeloma, my maternal grandfather died from pancreatic/liver cancer and my mother’s grandmother died of breast cancer at the age of 50. Cancer maintained a very real presence in our family.

At this point, I was very fortunate to be referred to a local Hereditary Cancer and Risk Reduction Clinic. After meeting with the director of the clinic, I learned that with my particular BRCA1 mutation, my lifetime risk for developing ovarian cancer was 63 percent and my lifetime risk for developing breast cancer was 87 percent. I elected to have a prophylactic bilateral mastectomy with reconstruction before I turned 60. This surgery lowered my lifetime risk of developing breast cancer to five percent. If I had a chance to help myself avoid developing another cancer, I was going to take it. I’d already lost the ovarian cancer risk lottery and wasn’t willing to try my luck again. I underwent my double mastectomy in April 2018 and completed reconstruction in September 2018. Somehow, this surgery felt easier than my cancer surgery. I believe it being my choice had a lot to do with that.

Once we found I carried the BRCA1 mutation, it was important to find out if anyone else in my immediate family also carried this mutation. Since all of the cancer in my family appeared amongst my maternal relatives, it was easy to narrow down who needed to be tested. I have two younger brothers, one of whom has three daughters. Fortunately, all three of my nieces tested negative for the mutation. My youngest brother, who also tested positive for BRCA1, has no children. And, in one of those odd quirks of fate, my husband and I decided to grow our family through adoption, after we had dealt with infertility for many years. Our daughters, who are of Asian descent, are much less likely to carry a BRCA mutation. Thankfully, my brother and I mark the end of this particularly destructive and sad strain of BRCA1 in our family.

My Only Real Choice

At the time of my diagnosis, I was a thirty-plus-year public school music teacher and orchestra director as well as a “Teacher on Special Assignment,” coordinating the elementary music program offered in the eleven elementary schools in our large school district. My husband also was a full time school orchestra director. Our youngest daughter was sixteen and an active high school junior, while our older daughter was twenty and in her second year at Rochester Institute of Technology. We were a stressed and busy household and my world had come to a screeching halt. I was devastated. How could this be? We had plans!

That was the first lesson I learned from cancer: it just IS. My only real choice was how I reacted to it. Like many people, I had lived my life thinking I was in charge of the direction my life took, when in reality we are all just a diagnosis (or accident, or natural disaster…) away from finding we have no real control at all.

Help Along the Way

How did I get through this difficult time? One step at a time, one chemo appointment at a time and with the unwavering support of my husband,  daughters, father, brother, friends and many coworkers. And, of course, with a gifted medical team that was always willing to listen, answer my questions and help me negotiate this difficult path.

Learning to accept help when I was used to helping and directing everyone else was humbling. I know that as strong as I thought I was, I could not have made it through without the caring people in my life and their many kindnesses.

In January of 2018, I came to the Coalition for my “Cancer 101” session. I had learned about the organization from my breast surgeon and also learned the Coalition was reaching out to gynecologic cancer survivors. I was amazed and moved by the generosity of all the staff members I met that day. After getting to know the Coalition and its many offerings, and completing my breast reconstruction, I found the weekday Gentle Yoga class with Susan Wood. This class was the perfect fit for me. In Gentle Yoga, I have met many other cancer survivors. These strong women have generously shared their individual journeys and experiences in the safe space of our class. The stretching and strengthening has helped me reconnect with my body after so much surgery. And, most importantly for me, the class has helped me to better focus and stay in the moment. Not the past, not the future.  This class is a lifeline.

Every Day is a Gift

April 2022 marked the fifth anniversary of my ovarian cancer diagnosis. It amazes me that I have the privilege of being here to say this. Every day since April 2017 has been a precious gift. I am thankful for my family, friends and the miraculous medical treatments that got me here.

* CA-125 is a protein that is often found in high amounts in the blood of patients with ovarian cancer. Used in conjunction with other types of testing, it can be a helpful tool in diagnosing the disease and monitoring the response to treatment. However, it is not an effective screening tool in the general population.

** A person who inherits certain mutations (changes) in a BRCA1 gene has a higher risk of developing breast, ovarian, and other types of cancer.