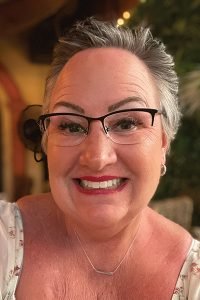 At 49 years old, I was living my best life. My children were doing well, and I was happy and having fun with my boyfriend of two years. I was one of many who believed the yearly Pap smear tested for all gynecologic cancers. The signs that something wasn’t right were subtle at first. For about four months, I experienced bloating, irregular periods, back pain, cramping, and eventually significant abdominal pain before I went to the OB/GYN.

Thinking I was going through menopause, I was put on birth control to alleviate my symptoms. However, those symptoms persisted and I came up with reasons for them all. My herniated discs explained the back pain; I was at the same age as my mother when she went through menopause; I went on a cruise, followed by holidays and birthdays, which explained the bloating – although, strangely, I was not gaining weight. When my mother saw the size of my tummy and said I looked pregnant, that was the moment I knew something was wrong. My primary care physician ordered some blood tests and an ultrasound, and thus began my 7.4 year journey with ovarian cancer.

Complete shock is an understatement. I had been diligent about my yearly OB/GYN appointments, so I couldn’t understand how this was undetected. I experienced every emotion you can imagine. In addition to shock, there was denial, fear, anger, hopelessness, sadness…and so on.

So many thoughts, so many scenarios swirled in my head. My family was greatly impacted by my diagnosis. My daughter was on top of her game, graduating Pittsford Sutherland High School with honors and in anticipation of attending School of Engineering at Clarkson University. My son was playing baseball, hanging with new friends, just being fourteen! My mother was devastated. My boyfriend went inward. He could not talk about it, just could not tolerate the feelings he was experiencing. I am fortunate to have a handful of “besties” and they were there by my side. I never attended an appointment alone; there was always a “cheerleader” with me.

Faced with many decisions, I was on autopilot, just following my oncologist’s plan of action. I was scheduled for a hysterectomy, to be followed by six months of chemotherapy. Surgery went as it should and I was fortunate to have mild to moderate side effects from chemo. I was grateful to still be able to take care of my family while working at a reduced capacity in my practice as a mental health therapist. It was encouraging to receive monthly confirmation from my oncologist that the chemo was working. At the end of treatment, I had No Evidence Of Disease – NED.
I was cancer free for almost five years and lived my life as normally as possible. Having put cancer in the ‘way back’ of my mind, I of course had an appreciation for life like never before and felt each day was a gift to be with my family, friends, and clients.

In October of 2020, the beast was back. I responded well to nine months of chemotherapy, but at the end of treatment I was not NED. I began taking a drug known as a PARP inhibitor, which seemed to be doing its job; the cancer was not growing. Unfortunately, my body could not tolerate the medication. The dosage was reduced twice, but the lower dose was ineffective. In March of 2022, I began a clinical trial, which I am currently on. The trial just fell into my lap, as an oncologist in the practice where I am being treated is a leader in that study. Like any trial, the hope is that the study medication works and can become a standard of treatment for others.

I learned of the Coalition when I was officiating a wedding of the daughter of one of my best friends. The groom turned out to be the nephew of Holly Anderson, and I soon became connected with her via email. I was interested in the Coalition but not quite ready to share my diagnosis in a group setting. Still, I saved Holly’s emails and about a year later, a “teal sister” and I reached out to her. My “sister” and I attended our first Common Ground meeting together. I don’t believe meeting Holly was a coincidence; she was placed in my path for a reason and the discovery of what that means is just beginning.

I feel for all who find themselves as caregivers to us on this unintended walk with cancer. I often hear people say, “You’re so strong,” “You’re going to beat this,” “You’re so healthy otherwise,” “I know what you’re going through,” or “I know how you feel.” Those words are not usually helpful. Some helpful things to say to a person who is newly diagnosed are, “I’m not sure what to say, but I care and I am here,” or “We will get through this together,” or “How can I help?” Hug them, tell them you love them. Just “be” with them. Listen to them, sit next to them, validate their feelings, cry with them, or sit in silence. It can be hard for a friend or family member to just “be” with all of the emotions their loved one is feeling. But even attempts to do that are seen and appreciated.

To be honest, my hope has wavered of late. But I am trying. I try every day to be grateful that I am here and living and spending time with family and friends. Even though I don’t feel well many days, I have hope that my oncologist has a few more tricks up her sleeve. And I have given myself hope by beginning a journey to strengthen my mind-body connection through seeking knowledge of ways to help myself though healthy eating (including supplements) and meditation. I’m still here, still learning, still living my best life while finding out what that means for me now.