Living with Gynecologic Cancer: Teresa B. 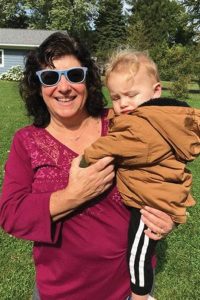 COVID19 may have limited our face-to-face interactions, but it will never dim the bright lights of those in our survivor community. Teresa Beach and I have been able to correspond by email, and here is her story.

When confusing symptoms emerged in the fall of 2013, Teresa Beach took notice but wasn’t overly concerned. It wasn’t until her annual OBGYN visit in December that she mentioned her urinary difficulties. At that visit, her sense of urgency and the sensation that she could never void completely were attributed to uterine fibroids. But on New Year’s Eve, Teresa began experiencing digestive issues. “I felt full after small amounts of food,” she recalled. Gastric trouble became a persistent, unwelcome companion. “By February, I was barely able to eat any solid food,” she recalled.

Multiple rounds of medical evaluations ensued. Teresa was seen by her primary care physician, her OBGYN, a gastroenterologist, and the emergency department of her local hospital. A colonoscopy that was ordered became too uncomfortable to continue, so Teresa was referred for a CT scan. This detected an ovarian mass, and her next consultation was with a gynecologic oncologist: a physician who specializes in diagnosing and treating cancers that occur on female reproductive organs.

On March 13, 2013, Teresa underwent a surgical procedure called a cytoreduction, more commonly known as debulking surgery, which is intended to remove as much of the mass as possible. Teresa underwent a total hysterectomy, removal of both ovaries and adjacent areas, and had ports placed for delivering chemotherapy infusions. Her post-surgical pathology report brought a definitive diagnosis: papillary serous ovarian cancer.

After one month of healing, Teresa began chemotherapy. Intravenous chemo drugs were administered through a central port and she received intraperitoneal (or IP) chemo through an abdominal port. In IP chemotherapy, which is sometimes used in gynecologic cancer treatment, chemo drugs are infused into the abdominal cavity, where they can work directly at the site of the disease.

It was a challenging regimen for Teresa. “I had twin tenth graders at the time and had plenty of parenting left to do,” she shared. “I was hopeful that I would see them through high school.”

Thankfully, Teresa’s treatment had the desired effect; her post-chemotherapy scans showed no evidence of disease. She then began a series of maintenance medications that held the cancer at bay for years, until a recent recurrence of her disease meant that she was treated once again with chemotherapy. A new maintenance medication causes some side effects, but Teresa’s post-treatment perspective serves her well. “I am able to function on this medication,” she gratefully acknowledged.

Not only has Teresa seen her twins through high school and onward, her graciousness and gratitude have been reinforced and strengthened along the way. “Absolutely everyone I knew was there for me,” she says. “Friends I didn’t know I had stepped up and helped our family.” Countless friends, old and new, rose to the occasion. They organized meals, transported Teresa to and from treatment, and ensured the twins had rides to and from their sports and music commitments. “Don’t be afraid to accept help,” she would advise others on a similar path.

“I have experienced a lot of losses,” Teresa shared. Her strength, stamina, and yes, her hair are among those losses, but are slowly returning. “And there are a lot of blessings. Gratitude for each day is an unexpected blessing.”