Sharing The Experience, Making A Difference

When Annie and I recently sat down together to discuss her walk with breast cancer, I was struck by the sunny disposition, resilience, and empathy of this remarkable young survivor. It is an honor to share her story with our community. 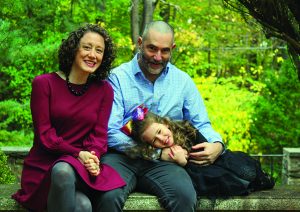 It was the last thing Annie Murphy expected. Breast cancer was just not on the radar for this 37-year-old mother of a toddler. But one day in early 2017, Annie returned home after a run to shower and change. This was when she noticed a lump in her breast. “That seems odd,” she thought. Although normally fluctuating hormone levels during her monthly cycle were the most likely explanation, she wasn’t going to leave anything to chance. Annie called her obstetrician-gynecologist; the same doctor who had been there through the birth of her daughter, Frances.

“I want you to come in this week,” the doctor said, knowing the odds were in Annie’s favor while hoping to offer reassurance and certainty. But after examining the lump, she referred Annie to a breast imaging center for a mammogram that same day. “She didn’t want to alarm me,” Annie recalled. Both doctor and patient simply sought answers that would ease any concern.

So it was then that Annie found herself undergoing a mammogram at a younger age than most. Afterward, she settled into the waiting area expecting a long interval before learning her results. But five minutes later, Annie was called back to speak with the radiologist, who recommended an ultrasound. When that procedure was completed, the radiologist shared her concern that she was seeing cancer in Annie’s right breast and nearby lymph nodes. A needle biopsy would be needed, and that could be performed right away. “I started crying,” Annie recalled. The possibility of cancer was overwhelming.

When the biopsy was finished, Annie went home to await the result. It had been a long, emotionally draining day. She and her husband Michael took the following day off work to await the expected phone call from the radiologist. When that call came, the couple learned together that Annie did indeed have breast cancer.

“I was shocked,” she said. ”This was out of the realm of anything I was considering.” Still, she was grateful the physicians involved in reaching this unwelcome diagnosis had taken her concerns seriously. While breast cancer most often occurs in middle-aged and older women(1), it can and does affect people of all ages. Annie was aware of this fact. And with the support of her attentive health care providers, she received her diagnosis shortly after noticing her first symptom. Now her medical team was about to grow.

With the assistance of her OB-GYN, Annie soon scheduled consultations with a surgeon and an oncologist. More referrals and appointments followed. Before long, Annie had assembled the team of medical providers that would see her through whatever lay ahead. Her team consisted of a surgeon, plastic surgeon, medical oncologist, and radiation oncologist; all were females, according to Annie’s preference. “They got it. I can’t express how grateful I am for this amazing team of women.”

Annie’s treatment plan was soon in place. She would undergo chemotherapy first, followed by surgery and radiation. All of this would be accompanied by a year-long regimen of drug infusions that target HER2 receptors, a distinguishing feature of Annie’s particular form of cancer, known as HER2 positive.

HER2 positive breast cancer is a subtype of the disease characterized by tumor cells with too much of a protein called human epidermal growth factor receptor 2 (HER2) on their surface. HER2 is present in small amounts on healthy cells and helps regulate their growth. But in the larger-than-normal amounts that occur in about 20 to 30 percent of breast cancers, it can cause uncontrolled cell growth(2). Fortunately, HER2 receptors are ready targets for certain drugs designed to zero in on them. Along with standard chemotherapy, Annie would receive infusions of two of these drugs: Herceptin and Perjeta.

“It seemed hard to understand at first,” Annie shared. Breast cancer isn’t a single disease, as she had learned, and each individual affected is unique. But Annie had gathered her information, assembled the medical team that would see her through, and was determined to survive.

The months of chemo were a challenging time. “I’m glad I was able to go on disability,” Annie recalled. “I needed my rest. I was really sidelined with some difficult side effects.” Through fatigue and other effects of her treatment, Annie relied on the support of her family and friends. “My husband Mike was amazing,” she recalled. So were her parents, in-laws, and her sister Kim, who — along with Mike — attended each of her doctor’s appointments. Frances remained in day care to help maintain a sense of normalcy in her life and ensure mama could get some much-needed rest.

“I was okay with losing my hair,” Annie shared. “It wasn’t a priority for me.” When her hair began falling out, Mike shaved her head. “We laughed and cried. It was surreal.” She and Frances had fun taking turns wearing her wig. “Frances didn’t really know what was going on, which was a blessing. But she knew things were different. I needed to get through this for her.”

While at her treatment center, Annie learned of the Coalition. She attended a Breast Cancer 101 session shortly after her first chemo treatment and stayed afterward to attend a Brown Bag lunch. “I was so blown away by the kindness of everyone at the Coalition. I felt a sense of community that I will always be grateful for,” Annie reflected. She was soon connected with a PALS mentor; another young mother who had finished her treatment and was doing well. It helped. “It was extremely comforting to talk to someone who really understood my fears and how I was feeling both physically and mentally.”

When chemotherapy ended, it was time for Annie to consider her next steps. She and her surgeon came to the conclusion that a mastectomy would be in her best interest. Annie also made a difficult but well-considered decision to remove the other breast at the same time. In addition, she opted for reconstructive surgery. Tissue expanders would be inserted at the time of surgery and gradually expanded with injections of saline solution over the following months. When this process was complete, the expanders would be surgically removed and replaced with permanent implants. Afterwards, twenty-eight rounds of radiation therapy would take place over a 6-week time period.

“I did well with surgery and radiation,” Annie recalled. Her side effects were minimal, and she felt the light at the end of her tunnel was growing brighter. Chemotherapy had begun in April of 2017 and her bilateral mastectomy took place the following September, followed by several procedures to complete the reconstructive process. Radiation ended in February the following year. All the while, HER2-targeted therapy continued. Annie completed all treatment in May, 2018.

“I am fortunate I have such a good support system. I’m so lucky,” she gratefully noted. Among Annie’s strongest supporters are her loved ones, friends, health care providers, and the Coalition. It was at the Coalition she found healing through Gentle Yoga classes, Mindfulness and Meditation sessions, and Voices and Vision writing workshops.

With her cancer treatment behind her, Annie returned to work. But the axis on which her world revolved had shifted. She began to seek — and soon found — a new position. She is now a staff member at a local cancer center, where she frequently interacts with recently diagnosed patients. It’s a perfect fit for her.

“I’ve always had empathy,” Annie observed. “But now I see everyone differently. I had no concept of what a severe illness meant, and I’m so grateful for all the people who came out of the woodwork to help me and my family. “

As a recent graduate of our PALS Mentor training, Annie is using her experience and hard-won wisdom to reach out to others in our survivor community. She offers her insight and reassuring presence while walking alongside others more recently diagnosed.

“I’m forever changed,” Annie added as our conversation drew to a close. “I feel privileged that I’m doing well and grateful for the connections among survivors.” Those connections make a difference. And Annie is making a difference for others. We at the Coalition are grateful that this empathetic, empowered young survivor chose to walk among us.