When the Nurse Becomes the Patient 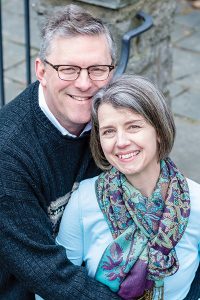 In her career as a surgical nurse at a Rochester hospital, Karen has cared for many patients recovering from procedures for gynecologic and breast cancers. Among her patients are those who have undergone mastectomies, as well as the reconstructive surgeries that are sometimes performed at the same time. A kind and compassionate professional, she never envisioned herself in the role of a person confronting the challenges many of her own her patients have faced. But that changed in early 2018, when Karen detected a lump in her left breast.

“It kind of reminded me of the shape and feel of a chickpea,” Karen recalled when we met to discuss her experiences of the past eighteen months. “I didn’t really know what to do with it. And I just sat with it for a couple weeks wondering, ‘Is it getting bigger? Is it getting smaller? Has it always been there? Is there something similar on the other side? Was I just perseverating on something that has been there?’” With insistent questions swirling in her mind, Karen waited attentively.

Three weeks went by and nothing changed, so Karen decided to act. She called her primary care physician, who saw her the following day. Karen found her doctor’s demeanor reassuring. “She sat right in front of me and said, ‘This is what we’re going to do.’ I knew that I had her ear and she was taking me seriously.” Karen was scheduled for a mammogram two days later.

Interestingly, the lump did not show up on the mammogram. But a subsequent ultrasound revealed an area of concern, and the radiologist recommended a consultation with a breast surgeon. Again, Karen felt she was in good medical hands. “[The radiologist] said, ‘This is what we’re going to do.’ I know this is her full time job, but still she made me feel like I was one of a kind.”

Uniquely equipped with knowledge of local surgeons because of her line of work, Karen consulted the office of one with whom she was familiar. Once more, she felt was supported. This surgeon “…gave me such great care, and wheeled right into my personal space and said, ‘This is what we’re going to do.’” Uncertainty still existed about the nature of the area detected on the ultrasound; one of the options presented to Karen during that consultation was surgical removal of the area.

“Yes, please,” Karen responded. “It’s not supposed to be there.”

Two weeks later, the lump was removed in an office procedure. The tissue was sent for pathology, and the results confirmed Karen’s worst fears; she was diagnosed with breast cancer. Since cancer cells were detected in the margins of the area removed, further surgery would be needed. Now Karen had more options to consider: lumpectomy and radiation versus mastectomy. If she chose a mastectomy, there was the option to undergo reconstruction. And, if she decided on reconstruction, there were still more choices to consider.

As if all this wasn’t overwhelming enough, Karen was also in the midst of planning her daughter’s wedding, which would take place in May. In fact, after receiving her pathology results, she drove directly from her surgeon’s office to meet with her daughter and a wedding planner. After that meeting, Karen sat in the lobby and dialed the number of a plastic surgeon she knew.

“I can’t believe I’m doing this,” she thought. “I have experience taking care of people with cancer, but cancer has never been a part of my story. “
Still, Karen scheduled her appointment and ultimately made the decision to undergo a mastectomy and a type of reconstruction with the impossible-sounding name of deep inferior epigastric perforator flap; DIEP flap for short. In this procedure, a breast mound is created using tissue harvested from the abdominal area.

Feeling confident in her decision, Karen enjoyed her daughter’s wedding, which took place two months before her surgery. “It was a beautiful celebration with family and friends,” she affirmed.

About a week before her surgery, Karen was caring for a patient recovering from the same procedure she was planning. Noting the lovely quilt on her lap, Karen soon learned that it had come from a PALS* pak provided by the Coalition. The woman also mentioned that she had received information from the Coalition on how to obtain a recliner on loan to use during her recovery, as lying in bed can be uncomfortable at first. Karen drove to the Coalition directly from work that day. She spoke with Jennifer, our Program Director and scheduled a Breast Cancer 101** session. Just days before her surgery, Karen received a PALS pak – and quilt – of her own. She also arranged for a loaner recliner.

“I felt like I was more than prepared,” Karen shared about her impending surgery, and the procedure went smoothly. During recovery, “I was uncomfortable, but it was all manageable.” Her husband Brad “…was a big support and continues to be.” Two of her sisters traveled from out of town to assist. Friends from church set up a meal train. One day, a few weeks post-surgery, Karen lamented that fact that she was missing blueberry-picking season. Brad put the word out on social media and the next day, a neighbor dropped off a large flat of blueberries and raspberries. “That is just one example of the generosity and compassion of people,” Karen noted. “That’s been a good example for me too. I think back to how much it meant for someone to bring a meal, or to ask how I’m doing, or to not gloss over my experience.”

Karen intentionally practices kindness and is adept at the type of compassion others had shown toward her; it’s a form of support that truly makes a difference. She is a regular at our Brown Bag table, attends our evening seminars, and has become a PALS mentor. For those who are newly diagnosed, Karen strongly recommends the Coalition. “There is a multitude of women who have gone before, and there’s lots of support for every stage of the journey.”

Karen also practices self-care, which has meant cutting back on her work hours to spend time with her four grown children. After hearing about the Naides Oncology Rowing team*** from a fellow Brown Bag attendee, Karen gave it a try – and loves it. “Rowing is a really big change for me,” Karen grinned. “My husband’s proud of me. He’s a runner – he’s run marathons. But me, I’ll try rowing.”

Cancer has brought about some deep soul-searching for Karen. “It was after my surgery when I settled on my purpose: to love God, to love people, and to love life.”

We at the Coalition consider ourselves fortunate that when her diagnosis struck, Karen found her way to our door. She brings an air of calm, attentive listening to our Brown Bag table, and to those she mentors. We’re grateful for the gift of Karen in our survivor community.

**An introductory session for the newly diagnosed. See page 10 for more information.
***Contact the Coalition to learn more about this rowing team for cancer survivors.