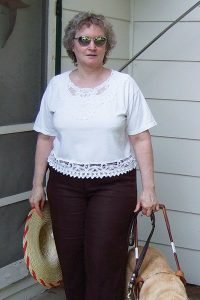 Kathryn “Kate” C is a multi-faceted individual with a wide array of accomplishments. An educator and published author of books and magazine articles, she is also a member of the American Council for the Blind – Rochester Chapter Board, Colonel William Prescott DAR Chapter Vice-Regent; member of the Wayne Writer’s Guild, Visionary Support Group; a freelance writer and editor; and Accessibility Ambassadress to the Memorial Art Gallery. In 1985, Kate was a forty-year-old mother of three children, ages eleven, nine, and four, when she contracted Eale’s Disease, a rare eye disease. In a few months, she went from having 20/20 vision to becoming legally blind. From that point, her vision gradually worsened until she was completely blind.

In an article published in Good Dog! Magazine in 1993, Kate vividly described her fears, grief, and uncertainty in becoming blind and entrusting her life to a guide dog. “A silent scream slammed through me,” she wrote, before continuing to acknowledge the increased mobility her dog would provide. It was a new way of navigating the world and opened up new possibilities for her.

An elementary school teacher before she became blind, Kate recalls, “I fought for my elementary students in the public school system and went right on with public education when I went blind. As a newly blinded woman, I had more questions than answers and realized that most sighted people have never talked with or interacted with a blind person. My days of public education really began then. If I didn’t speak up for what I needed, I might as well sit in the rocking chair, knit, and let the world go by. That wasn’t in my nature, so the advocacy began in earnest.”

As Kate grew adept at self-advocacy, her children also grew to adulthood. Then grandchildren entered the picture. Then great-grandchildren. Kate flourished as an educator, writer, advocate, and matriarch of her thriving family. Time went on, and the year 2020 began quietly.

In early March of 2020, Kate went for her screening mammogram. “There was no lump; no sign of anything wrong. Nothing,” she declared. The next day, she had another routine appointment, this time with her dentist, whose counsel in the months ahead would prove valuable. A few days afterward, Kate was surprised when the radiologist called to say an area of concern had been detected on her mammogram and additional imaging would be needed. So Kate returned to the imaging center.

Although another mammogram did not detect anything unusual, an ultrasound revealed a small area that the radiologist felt should be biopsied. Kate underwent a needle biopsy the same day then returned home to await the results. The call from the radiologist came in a couple of days; Kate was found to have breast cancer.

Having lost her own mother to breast cancer in 1976, Kate was devastated. By the time of her diagnosis, however, she was a seasoned self-advocate. Navigating a sighted world as a blind person required a high degree of readiness to speak up and express her needs. “I’ve been at this long enough,” she recalled. “I had to advocate for students who were in danger of becoming lost in the cracks of the [public education] system.” She was adept at doing so gently, clearly, and uncompromisingly. “State your need in a pleasant but firm way,” she advises. “There are services to which you’re legally entitled.”

Kate’s pleasant, direct manner served her well at her first oncology appointment. By this time, patients were the only ones allowed into medical facilities; support people waited at home or outside in the car. That day, Kate’s husband drove her to the appointment and accompanied her into the center. Kate introduced him as her “sighted assistant” and he was cleared to guide her though the unfamiliar facility and remain by her side during medical consultations. As her sighted assistant, he would also accompany her as far as possible to medical procedures.

For Kate, the procedures she and her medical providers determined would be best included a partial mastectomy (commonly known as a lumpectomy) and an eleven-day course of radiation treatments. Her surgery was delayed due to COVID concerns, and in the interim, Kate began taking an oral hormonal medication to target her estrogen-and-progesterone-sensitive tumor. She will continue that medication for at least five years.

When the time for surgery came, Kate’s sighted assistant – her husband – was able to enter the hospital alongside his life partner at a time when most support people were not allowed to do so. He patiently waited the fourteen hours it took for Kate to undergo surgery and recover sufficiently to go home. For her radiation treatments, he escorted her to the door of the room before thoughtful technicians kindly led her to the table for the procedure. This gentle yet determined advocate sought and found the support she needed at every turn.

It was Kate’s dentist – the one she had seen the day after her mammogram – who first suggested she call the Coalition. A survivor of the disease herself, her dentist had availed herself of our programs and services, and remains a treasured member of our survivor community. Kate soon attended a Zoom Breast Cancer 101 session, then began attending Brown Bag Friday lunches (also conducted by Zoom), all before her surgery. She has since become a frequent, cherished, sunny presence at these gatherings.

During COVID, we at the Coalition have been delivering PALS Paks to BC101 newly diagnosed individuals, and when Kate received hers, she was overwhelmed with emotion. “Somebody really does care!” she thought. However, she was unable to read the copy of Dr. Susan Loves‘ Breast Book contained in the pak and didn’t want to impose on others to read it to her. The resourceful Kate checked the Library of Congress and, sure enough, found an audio version of the book, which she was able to download. Where there is a will, as Kate knows so well, there is a way.

Kate has also participated in our Voices and Vision writing group (a natural fit for her), where she found the facilitator “very accommodating” and enjoyed the classes to the fullest. She also took part in a four-week session of Surviving and Thriving on Aromatase Inhibitors, and was grateful to receive an email containing all the printed materials. A device that converts her email to spoken language ensured Kate’s full participation in this informative and supportive program. A national group for blind people diagnosed with cancer has rounded out Kate’s circle of support and provided her with additional resources, but her local connection is here with us at the Coalition. And we are grateful for her presence among us.

A quintessential educator, Kate has been gently guiding us at the Coalition in ways to ensure a blind person is included in the conversation. She politely requests that Brown Bag participants identify themselves when speaking – a simple but inclusive strategy. Body language and facial expressions aren’t useful cues for her, and Kate reminds others to “Use your words.” In fact, she once scheduled a telemedicine visit with a provider whose visually expressive communication style wasn’t working for her, and found that conversation to be helpful.

Of course, having a sense of humor helps, and Kate is not one to shy away from a good joke. When the remark was made at a recent Brown Bag that “Hindsight is 20/20,” she quipped, “That’s the only kind of sight that’s 20/20 for me!”

When she went blind, Kate’s first thought was of her young children. Upon learning of her breast cancer diagnosis, her thoughts once again centered on her now-adult children. “Both times, I wanted to assure them that I’m okay.” Kate relied on her innate inner strength to gather the outer resources needed to navigate this uncharted territory and, in the process, became more than just okay. She found new ways to make meaningful contributions to her family and to the world.

“Everything is possible,” is Kate’s reminder to anyone faced with a life-altering situation. “You may need help in the beginning, but then you’ll be off and running.”