A Personal Journey: Michelle A. 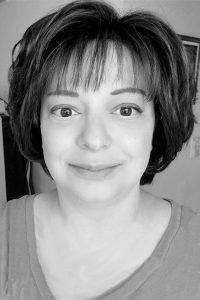 “I remember the day like it was yesterday,” Michelle Arbore said when we met to talk about her breast cancer diagnosis. As she was walking her son home from a neighbor’s house, a phone call came that heralded a major detour in her life. “You have breast cancer,” said Michelle’s doctor.

A Board member of FemCity, Michelle had worked for two consecutive years to raise funds for the Coalition in an event called Bra Dazzle. She was familiar with our organization and our programs. In September of 2017, she had received a clean bill of health at her annual physical, which included a manual breast examination. One month later – in October, breast cancer awareness month – her husband noticed a lump in Michelle’s breast.

Michelle soon brought this finding to the attention of her gynecologist, who felt the risk of cancer was low, but decided to err on the side of caution; she referred Michelle for a mammogram and ultrasound. At age 39, Michelle hadn’t crossed the threshold to consider regular breast cancer screenings. But the lump changed everything.
When the mammogram was completed and the time came for the ultrasound, the tech informed Michelle that the radiologist might be ordering more tests. “I knew right away something wasn’t right,”

Michelle recalled. Presently, the radiologist entered the room and explained that areas of concern had been noted on both breasts. She offered Michelle the choice to do a biopsy right then or schedule it for another day. “I said no, I’m here. Let’s just get it done.”

It all happened on a Friday. The imaging and biopsy were completed and Michelle went home to await the phone call informing her of the results. The following Tuesday became the day etched in Michelle’s memory.

“I just stopped dead in my tracks.” Michelle’s voice wavered as she recalled the fateful phone call, but she continued. “I couldn’t cry. My son was six years old at the time and I didn’t want to scare him. So I got him settled, went into my office, fell to my knees, and started crying.” Michelle rallied herself long enough to call her husband, who was quickly by her side. Before long, she was surrounded by family and friends who gathered to share her shock and hold her – and each other – in solidarity and comfort.

Michelle gently shared the news with her son. “Mommy got some news from the doctor that I’m sick. But I’m going to be okay.” She continued, “But I don’t think he really understood what was going on.”

As soon as her son left for school the next morning, Michelle started calling the offices of doctors recommended by her primary care physician. “I was on the phone from the time he went to school until 1:30 on the nose,” she noted. “I was done making appointments, talking to insurance, talking to friends, and all of a sudden I said out loud, ‘What do I do now?’” Her eyes fell on a photo of herself with her husband and son, and Michelle began to cry. “I started begging, ‘Don’t take me away from my family.’” The tears lasted for about an hour. Then, realizing her son would soon be home from school, she took a deep breath, dried her tears, and was fully present for him when he arrived. “I went on with my day.”

With multiple surgical and oncology consultations scheduled, Michelle began the process of choosing her care providers. She selected a surgeon whose professional yet easygoing manner was a good fit for her, along with a team of providers at a local treatment center where she felt comfortable and cared for. “Everybody was just great,” Michelle shared.

Because she was diagnosed with triple negative disease, meaning there were no hormonal or other cell growth factors to target with specific therapies, chemotherapy became an important part of Michelle’s treatment. Her oncologist felt chemo would be a good first step in her case, and eight bi-weekly rounds of treatment were scheduled; Michelle would be in chemotherapy for sixteen weeks.

Then she added one more appointment to her calendar: a BC101 session at the Coalition. “This was the first place I thought of when I was diagnosed,” Michelle affirmed, and remains grateful for the support and information she received.

Chemotherapy began shortly afterward. “It was tough,” Michelle shared, “but I didn’t have a lot of symptoms. I did have the support of my family in keeping my son on his schedule.” Her husband would often see his son off to school in the mornings. On the days Michelle wasn’t feeling well, her father took charge during the after-school hours. In addition, friends came out of the woodwork to provide meals. “It was definitely good to see I have great people in my life,” Michelle gratefully acknowledged.

Shortly before her diagnosis, Michelle began working with a personal trainer. The two women forged an immediate bond that solidified while Michelle was in chemo. This newfound friend created a basket of small but thoughtful gifts, each individually wrapped, and presented it to Michelle. The instructions were simple: when she was having a bad day, she should pick out a gift. “It really did bring a smile to my face every time I opened one,” Michelle recalled fondly. Her son jumped on board with the idea. When he sensed his mom wasn’t feeling well, he would bring her a gift, saying, “Here mommy, open a present. You’re having a bad day.”

Chemotherapy had the desired effect; no trace of the tumor could be found on Michelle’s post-chemo scans. She and her family breathed a tremendous sigh of relief. Still, the time had come to make a decision about surgery. Michelle opted for a bilateral mastectomy – removal of both breasts – with reconstructive surgery. The procedure took place in April of 2018, and once again, Michelle’s family and friends stepped up to the plate to support her during recovery while keeping her son’s daily routine as close to normal as possible.

While a breast cancer diagnosis is a lot to process for an adult, it can be overwhelming for a child. “My son didn’t know how to get his feelings out and how to react,” Michelle revealed. “He got very angry and didn’t know how to show his anger. So he would just scream… I felt a lot of guilt even though I knew it wasn’t my fault. But I’m his mother, I’m supposed to protect him, and I couldn’t fix what he was going through. That was hard for me. But he did go see a counselor and he got better. I would say for anybody in a similar situation to talk to your kids and see if they need help. If we’d done it sooner, he probably would have gotten through it a little easier. But he’s gotten through.”

Once she recovered from surgery, Michelle’s active treatment was finished. She found that moving into healthy survivorship – that desperately longed-for phase – was a more difficult transition than she anticipated. “Nobody can tell you how to feel,” she acknowledged, and spoke of a period of depression that took her unawares. “Everybody’s different. Some people may not go through that. But you’re busy going to doctors and doing this and preparing for that and getting things ready, and all of a sudden, you’re all better. Now what?”

Michelle decided to take the summer off work and spend the time with her son. It helped them both. “In July it really hit me,” she observed. “I started to feel happy again, like I’m getting back to normal. Whatever that was,” she added with a laugh. “I’m getting back to living again.”

Mid-October of 2018 marked the one-year anniversary of Michelle’s diagnosis. “It doesn’t seem like a year – it seems like it just happened yesterday,” she mused.” It’s definitely brought me closer to my friends and family, and to my son.” With her hard-won appreciation of life’s small gifts, simply getting her nails done has taken on new meaning. “I couldn’t do them during chemo.”

Her world may not feel quite the same as before her diagnosis, but many things are clearer to Michelle now. “You never believe it when somebody says ‘The sky is bluer.’ But it is. Things look different when you go through something like that.”

Michelle may have been sidetracked by breast cancer, but she is back to being a healthy mom; back to work; back to being her best self in this world. There are places this disease can’t reach, and it hasn’t touched her indomitable spirit. It never will.

Michelle’s story appeared in the Voices of the Ribbon, Fall 2018 edition.