Life is a Group Effort 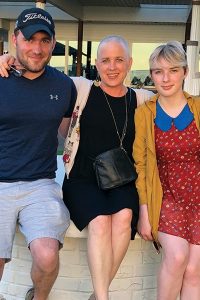 A strong, independent woman from a young age, Sara knows how to navigate a complex world on her own. “I was always working,” she shared when we met to talk about her breast cancer diagnosis and all that followed. “I’ve been a single mom most of my life and never really had anybody supporting me [financially].” Sara’s son, Dylan, and daughter, Lydia are young adults now. They, along with a cadre of beloved family members and friends, give Sara a sense of community and purpose. Beginning in late 2018, they formed a circle of support around her; one that Sara never anticipated she would need.
When her regular screening mammogram in June 2018 yielded normal results, Sara felt reassured. A few weeks later, her primary care doctor noticed a small lump in Sara’s breast. Her physician’s tone was equally reassuring: “That’s evidence of your dense breast tissue.”

“I knew I had dense tissue,” Sara acknowledged, having learned this from previous mammograms. Breast density refers to the normal differences in tissue that occur among individuals. Breasts are comprised mostly of glandular tissue and fat; density refers to the ratio between the two. Dense breasts have a higher amount of glandular tissue compared to fat, which can present a challenge to radiologists who interpret mammography images.

“I took her word for it,” Sara said of her doctor’s assessment. But a few months later, the lump had grown. “And it was changing. It didn’t seem okay.” After alerting her doctor, Sara was referred for a breast ultrasound and biopsy. As she awaited the results, a close friend, Jenny, drove from her Hudson Valley home to be by Sara’s side. Jenny was there when the phone call came from the radiologist: the diagnosis was breast cancer, a subtype known as invasive lobular carcinoma (ILC). Lobules are milk-producing glands deep within the breast, and ILC accounts for about ten percent of all breast cancer diagnoses.

Sara reeled. “It was such big news; it was hard to internalize and to realize the impact.” Still, the immediacy of her situation was clear. “I just started thinking ‘what am I going to do next week?’ I couldn’t think about how it was going to be a life-changing impact. It was good to have Jenny with me because I had to think about scheduling a lot of doctor appointments. It all happened really fast – it’s a bit of a blur.”

With imaging results revealing a mass that appeared to be about five centimeters in diameter, the surgeon Sara consulted recommended a mastectomy. The procedure was scheduled for the third week of January, 2019. This gave Sara a few weeks to consider breast reconstruction.

It was at this time that Sara first found the Coalition, thanks to information provided by her treatment center. She attended a BC101 session and connected with a PALS mentor whose experience shed some light on her reconstruction decision. After consulting with a plastic surgeon and visiting the Coalition’s Resource Library to view photographs of various types of breast reconstruction, Sara made her choice: she opted for no reconstruction at all. “Under stress and duress, it’s hard to make a life-term decision like that,” she acknowledged. “But I think it’s really helpful to give yourself time to make a decision that big.”

By the time Sara’s mastectomy day arrived, she was at peace with her choices and ready to move forward. The procedure went smoothly and included the removal of five lymph nodes to check for cancer spread. Soon, she was recuperating at home. Having planned to return to work after she recovered sufficiently, Sara wasn’t prepared for the news she received at her surgical follow-up appointment a week later: the tumor actually measured eight-and-a-half centimeters. Additionally, three of the lymph nodes removed contained cancer. Her surgeon recommended further surgery to remove more nodes and referred Sara to a medical oncologist for a consultation regarding chemotherapy. “I was just blown away,” Sara recalled. “Then my diagnosis really sunk in; this is serious.”

“So I had a second surgery in February and about three weeks after that, I started chemotherapy. I didn’t have a lot of time to breathe,” Sara continued. One more lymph node was found to contain cancer. “That’s when I had to take a deep breath and think about what I needed to do. I just needed to not worry about my job, and needed to be able to focus on getting through all the things that were coming in the next few months.“ Chemotherapy, she learned by this time, would be followed by radiation. The hope of a quick return to work began to slip from Sara’s grasp.

Still, making the decision to take an extended leave from her job was fraught with financial uncertainty. With a health insurance plan that covered her medical expenses after a substantial out-of-pocket deductible, she was at a loss. This was when another good friend, Joe, started a GoFundMe campaign to cover her costs. “He raised that much money within about three weeks. It was amazing,” Sara gratefully recounted. “And my stepsister-in-law, Erin, created a Mealtrain for me, and my co-workers contributed [meals] during the period of my chemotherapy treatments. Priceless!”

With her financial burden eased, Sara took full advantage of the time off work. “I did a lot of reading. I came to the Breast Cancer Coalition on Fridays for Brown Bag. I joined support groups. I did yoga, meditation, forest therapy, and energy work. I did the LiveStrong program at the Y. I went to the Kripalu Institute for a two-day workshop. I was working on my health at every level: mind, body, soul…I think that’s why I got through everything pretty well, all things considered.”

Although she attributes much of her recovery to staying active, Sara also took plenty of time to rest and renew her reduced energy reserves. “My couch and I got to be really good friends!” she laughed, then grew introspective. “What I learned most about taking care of myself was about self-love. I’ve always been very loving to others, and giving and thoughtful for other people. I really had to turn that inward and give that to myself. My cancer was right over my heart. I felt like that was significant.”

Sara’s children, of course, stepped up to the plate. Dylan accompanied Sara to her initial appointments, “… which I thought was very sweet – to be there with me, to listen, to help me take notes of what I needed to know and what I needed to do.” And Lydia was “…very nurturing and supportive. She was a good liaison for all my friends when I was in surgeries. She’s great with texting. She would get the group text going: Mom’s okay.”

Now among our most recent PALS Mentor trainees, Sara has, indeed, come full circle. “My new motto is ‘life is a group effort.’ I want a T-shirt to say that, because it’s true. You can’t do any of it alone. I can’t do anything I’ve ever done without the support of my family, my friends – everyone. [Cancer] brings out the deepest compassion in people.”

Likewise, we at the Coalition can’t do what we do without our survivor community, including Sara. She has weathered the worst of the storm and is now able to reach out with compassion to others facing similar fears and uncertainties.

Cancer is not a gift. But Sara is. “I really feel like it’s turned me into a pretty bad-ass woman. It puts you through a lot and I feel like I’ve come through it as a much stronger person, inside and out.”