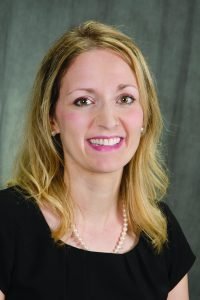 An assistant professor of Medicine and Obstetrics and Gynecology at the University of Rochester, Western New York native Rachael Turner, MD., PhD., focuses on treating people with gynecologic cancer, as well as on research. Whether engaged in patient care or participating in clinical trials, Dr. Turner works to make a difference for those affected by gynecologic malignancies. It is our honor to include her perspective in our newsletter.

PB: What is your role in the care of people with gynecologic cancer and why is it important for these people to have a gynecologic oncologist?

PB: We know that gynecologic cancers represent a wide range of diseases, and a wide range of individuals are affected by these diseases. Are there concerns common to your patients, whatever their diagnosis, that they bring to their consultations with you?

RT: Surgeries often involve removing the ovaries and uterus. Coming along with that for younger women is loss of fertility and hot flashes. And for women who are beyond menopause, sexual dysfunction and urinary incontinence are still concerns. That’s definitely unique to our specialty.

PB: How do you assist your patients in addressing those concerns?

RT: We recommend to women who haven’t had children or want to have more children, and who need surgery that could impact their fertility, to meet with a reproductive endocrinology and fertility specialist. At our group here at Strong, we have a sexual health expert. Her name is Dr. Kranz. She’s been amazing for our group. Overall, physicians may not be as well-educated as we should be on sexual health. It’s such an important part of lives and relationships. Dr. Kranz is family medicine trained but she sought out additional training and certification to appropriately respond to people’s sexual health concerns. She’s been a real asset to our group.

There are strategies for improving sexual dysfunction and symptoms after undergoing surgery and treatment for cancer. There are antidepressants that can help with hot flash symptoms, dilators and vaginal creams to help with pain during intercourse – things along those lines.

PB: That’s an important concern, and one that’s sometimes mentioned by survivors in our community. Sexual concerns can affect women with breast cancer as well as those with gynecologic cancers, although in the latter scenario, with malignancies and surgeries directly involving the reproductive organs, it’s a very different experience.

RT: Yes, and with the hormonal therapies often used in breast cancer, sexual concerns arise in those instances also.

PB: At the Coalition, we truly appreciate your interest in research and your participation on our Research Review Panel in the past. As a researcher, is there any work you’ve participated in that has directly affected patient care?

RT: Richard Moore, the chair of our department, has focused on finding new biomarkers for gynecologic malignancies. He has been able to show that HE4* is a biomarker that can actually help us determine if a pelvic mass is likely to be malignant or not. HE4 in combination with CA125 are tumor markers that can also be helpful in detecting recurrent disease earlier. Largely, our lab has been interested in biomarkers.

I’m still pretty young in my career, so I haven’t had the opportunity to see my research translate into patients yet, but that’s sort of the Holy Grail. The project I worked on as a Ph.D. candidate – my thesis work – was looking at an immune therapy where we injected a cytokine called IL-12 into tumors. It was a breast cancer model actually, but a group here at the University of Rochester is bringing that forward in pancreatic cancer in the near future. I’m really excited that a piece of research I did before has helped. It certainly wasn’t the only study that suggested this immune therapy could be helpful. It’s exciting that work I contributed to and is likely going to come into clinical trial in the near future.

I’m still pretty young in my career, so I haven’t had the opportunity to see my personal research efforts translate into FDA approved treatment for patients yet, but that’s sort of the Holy Grail. The project I worked on as a Ph.D. candidate – my thesis work – was looking at an immune therapy where we injected a cytokine called IL-12 into tumors. It was a breast cancer model actually, but a group here at the University of Rochester is bringing IL-12 therapy forward in pancreatic cancer in the near future. I’m excited that a piece of research I did before has worked well enough to consider using it for patients. It certainly wasn’t the only study that suggested this immune therapy could be helpful, but it is exciting that the body of work I contributed to is likely going to come into clinical trial in the near future.

PB: That is wonderful! I’m sure that’s a great feeling.

PB: What else do you see that may be on the horizon for treating gynecologic cancers?

RT: I may be biased because my background is in immunotherapy, but I do think immunotherapy is the wave of the future for a variety of cancer types, including gynecologic malignancies. There are some exciting early-stage clinical trials in cervical cancer where T cells are taken from patients’ tumors, expanded in a lab, and then given back to those individuals. I think a lot of us see that likely coming for patients.

In uterine cancer, there has been a combination immune therapy regimen – Keytruda and Lenvima**, which is now FDA approved. We’re seeing that when it does work for people, it can give them some really long response rates. That’s a way immune therapy is already working in one gynecologic malignancy.

In ovarian cancer, I think we will get there as well. The tumor microenvironment is different in ovarian cancer than other cancer types, so it may not be something as straightforward as, say, the checkpoint inhibitors that we use in lung cancer and melanoma. It may be a combination of different things, but I do think we’ll find an effective immunotherapy regimen in ovarian cancer at some point.

PB: That would be fantastic news. We personally know a number of people affected by ovarian cancer here at the Coalition, as well as those facing all types of gynecologic malignancies. Any one of these diseases can be challenging for patients and for their medical providers. What drew you to your interest in treating people with gynecologic cancers?

PB: I’m sorry to hear that. So you’ve been directly impacted by these diseases.

RT: Thank you. Almost everybody has been directly impacted by cancer in some way or another; it’s a sad truth.

PB: Unfortunately, yes. But, at the end of the day, what gives you hope?

RT: The amount of research being done in gynecologic cancers makes me optimistic and hopeful for the future. Even though I’m a young clinician, I’ve seen treatments come through that are really impacting patients and helping them live longer; treatments that carry fewer side effects than chemotherapy, and specifically, fewer long-term side effects. Research is just exploding in these areas and I think we’ll continue to see more and more progress made in the coming years.

*Human epididymis protein 4 (HE4) is a…clinical biomarker that can be readily detected in patient serum and is overexpressed in EOC [epithelial ovarian cancer] tissue. https://www.nature.com/articles/s41598-020-65353-x

This story appears in the Summer 2021 edition of Voices of the Ribbon newsletter. 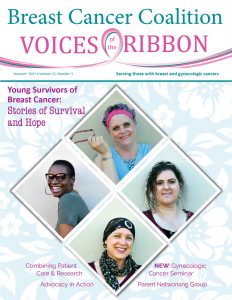