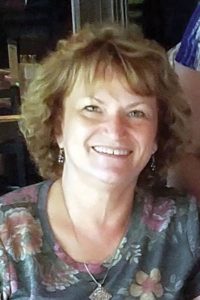 APIE is an acronym for Assess, Plan, Implement, Evaluate. Barb learned this while studying management in college. For many years, it has been a valuable tool in her professional career. Naturally, it was one of the first things that came to mind when she faced a breast cancer diagnosis in 2013.

In September of 2013, Barb found a lump in her right breast while in the shower. She immediately called her gynecologist and set up an appointment for the next day. Her doctor wasn’t overly concerned, but sent her for imaging to be on the safe side.

Barb remembers leaving the gynecologist feeling like her lump wasn’t going to be a problem. She had already undergone genetic testing due to a family history of gynecologic cancers, and her results were negative for any breast cancer mutations. She didn’t see any need to worry.
When her mammogram was done the following week, Barb was told that the radiologist saw something that warranted another look. At that point, she began to get concerned.

After further imaging, it was decided that a biopsy would be done the same day. Barb recalls the doctor saying she was pretty sure it was cancer. While Barb was on the table, well before knowing her results, she asked the doctor what the next step would be.

She received a call the very next day with the results; it was indeed cancer. Barb was in shock. Her diagnosis was Invasive Ductal Carcinoma that was estrogen receptor positive. Invasive ductal carcinoma means the cancer has invaded, or spread, to the surrounding breast tissues, and estrogen-receptor-positive cancers grow in response to the hormone estrogen. Barb was sent for an MRI the following day, which detected cancer in one of her lymph nodes as well.

Having grown up in Rochester’s 19th ward, where she attended grammar school at St. Monica’s and high school at St. Agnes, Barb attended the University of Buffalo before transferring to the State University College at Brockport. She spent fifteen years as a Recreational Therapist for the New York State School for the Blind in Batavia before deciding to attain her Master’s degree in Public Administration with a health care and therapeutic recreation emphasis. After completing a two-year internship, where she learned a great deal about New York State government, she was placed at various state agencies in the Albany area. She worked in the human resources arena and enjoyed that role, but after six years, she was ready to get back home; both she and her husband have family in the Western New York area. Barb was recruited by the Finger Lakes DDSO (Developmental Disabilities State Office) in Rochester, where she eventually became the Director of HR and a Regional Director for the Office for People with Developmental Disabilities (OPWDD). She and her husband have since retired.

Barb’s professional life had always been in project management and, grounded in this mindset, she instinctively treated her breast cancer diagnosis the same way. She naturally gravitated toward the familiar APIE method she had relied on for years.

She started doing her research, and called friends in her community of Batavia for advice on physicians to consult. She was introduced to a several breast cancer survivors who mentored her about many of the things she would need to know. In her effort to make the best decisions for herself, Barb interviewed five medical professionals. At each appointment, she was accompanied by her husband, Joe. She went to every medical consultation with a spiral notebook loaded with questions and took notes on everything.

Barb began attending a monthly cancer support group in Batavia, where she found many survivors to help her through. This network of people was invaluable to her. She eventually selected an oncologist in Rochester, a surgeon in Buffalo, and a radiologist in Batavia, who all worked together on her behalf.

At the time of Barb’s diagnosis, a new cancer center had just opened in Batavia. Barb was one of their very first patients. She found a doctor she connected with and felt comfortable and confident with her.

Barb’s treatment started with seven rounds of chemotherapy, lasting from October through January. At the end of February, she underwent a lumpectomy with lymph node removal. After healing from surgery, she had 32 rounds of radiation. Barb tolerated the treatments fairly well. She struggled with nausea during chemo but kept it in check with lots of jello and ginger ale. Her hair began falling out at the time of an employee recognition event at work in honor of her 30 years of service. She recalls watching her hair fall out in the shower and becoming upset. She rallied, however, and attended the event after using a lot of hairspray to keep her hair in place and cover up the bald spots. She eventually went to her hairdresser’s to shave it off and then wore a wig until it grew back.
Barb and her husband Joe are dog lovers. At the time of Barb’s treatment, they had three dogs. One of them, a cocker spaniel named Madison, was diagnosed with lymphoma. Madison went through chemo treatments for two years. It was during this time that Barb herself was diagnosed. She recalls that Madison would lie next to her in bed and was her little chemo-buddy.

For her aftercare, Barb originally saw three doctors – her radiologist, surgeon and oncologist – every three to four months for the first two years. Now, since she’s passed the five year mark, she sees her oncologist once a year.

It was through her employer that Barb first learned about the Breast Cancer Coalition. New York State employees raise money for charitable organizations through the SEFA (State Employees Federal Appeal), and the Coalition was one of the agencies receiving donations. Many staff members made contributions in Barb’s honor. Her friends and co-workers were invaluable in her journey. Now Barb participates regularly in the Gentle Yoga program offered by the Coalition in Albion, which she says helps tremendously with her range of motion.

Barb is also a natural mentor for other women who have been diagnosed with breast cancer. She readily shares her experiences with those who come to her with questions and she loves helping them.

Returning to APIE – Assess, Plan, Implement, and Evaluate – Barb says she’s in the evaluation stage of the process. She’s still learning all she can about her diagnosis and plans to undergo genetic testing to add to her wealth of knowledge.