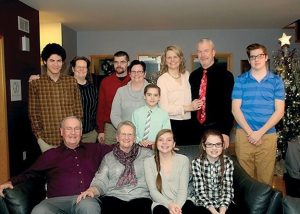 Family has always been first and foremost in Carolyn Doty’s life. Carolyn and her husband Dave met by chance at Alfred State when she was on a double-date with another young man. When her date arrived to pick her up, she bent down to the car window to say hello and saw a tall, dark, and handsome man in the passenger seat. The next day, that tall, dark, and handsome young man called and asked Carolyn for a date. Carolyn and Dave were married a short time later; that was fifty years ago. They now have three daughters, five grandchildren, and five great grandchildren.

The strength and closeness of her family helped Carolyn through the toughest challenge she and her loved ones have ever faced.

It all started as a regular day for Carolyn, but didn’t end that way. She came home from work feeling uncomfortable, and went to change her clothes. To her surprise, there was a red mark in her bra when she took it off, and that’s when she discovered a lump. She investigated it and realized it was hot to the touch.

Carolyn’s first reaction was disbelief. She sank down until she lay on her bedroom floor. Then she checked the spot again; it was still there. An uneasy feeling washed over her. After giving herself a couple hours to process this new discovery, Carolyn told Dave. The following morning she called her doctor, who immediately scheduled an appointment for a mammogram and ultrasound.

The mammogram came first, and the ultrasound followed soon after. Some suspicious areas were noted that Carolyn’s radiologist wanted to biopsy. There were four biopsies in all; two on either side. A few days later, the doctor called with the results. Carolyn had a malignant mass in her left breast and a benign cyst in her right one. She was diagnosed with HER2-positive breast cancer. In other words, her cancer was found to overexpress a protein called human epidermal growth factor receptor 2 (HER2), which can promote the growth of some breast cancers.

Carolyn’s first reaction to the diagnosis was that she wanted a bilateral mastectomy; the removal of both breasts. After careful consideration and some long conversations with Dave, she ultimately decided to have a single mastectomy of her left breast.

At this point, Carolyn broke the news to her family about what was going on, asking her daughters not to tell her grandchildren because she didn’t want to frighten them. Shortly after this conversation, Carolyn went to visit one of her daughters and learned that she had indeed told her children. Her reason was that she wanted them to see a positive outcome.

In June of 2013, Carolyn had her mastectomy, opting for reconstruction with a tissue expander. The whole process went smoothly, and she spent three days recovering in the hospital surrounded by her family.

Following her post-operative directions to a ‘T’, Carolyn viewed the experience the same way she views childbirth: she remembers the intensity but doesn’t pull the painful memories up front very often.

Dave accompanied Carolyn to all her appointments, helping her remain calm and centered. Determined to face whatever came her way with as much dignity as possible, Carolyn wanted her family to see her strength. The only person who saw her fear was Dave.

In July of 2013, Carolyn began three months of chemotherapy, her faithful partner Dave at her side through every treatment and follow-up appointment.

At her first chemo appointment, a young nurse was assigned to take care of Carolyn. After that first round of treatment, Carolyn knew that she and that kind and attentive nurse who took exceptional care of her would become best friends. She kept Carolyn completely in the know about what to expect from treatment. They’re still friends to this day.

Carolyn’s breast cancer was the first major health episode that her family has had to deal with. One significant experience that resulted from her diagnosis and treatment was the creation of ‘Team Doty’ in May of 2013. One of Carolyn’s daughters created a logo to use on Facebook, and any of their friends who wanted to show support could use the logo on their own page.

When Carolyn’s boss saw the logo, she asked permission to use the logo on T-shirts created to show their support. (At the time, Carolyn was working for Morgan Estates; she has since retired.) Her co-workers sold eighty-three shirts in a show of support that helped bolster Carolyn emotionally through her treatments.

Carolyn and her family decided that Team Doty would participate in the American Cancer Society’s Relay for Life in June of 2015. (This is a distinctly separate event from the Coalition’s Pink Ribbon Walk and Run every Mother’s Day.) Afterward, when most of their family had gone home, Carolyn and her daughter Beth continued walking around the track. It was dusk and Carolyn was feeling emotional. She slipped her hand quietly into her daughter’s; Beth squeezed it and held on tightly. Carolyn whispered to her, “When you were little and feeling afraid, I would hold your hand until you felt secure. Today you hold mine.”

Carolyn’s tight-knit family made her feel honored, supported, and never alone throughout her walk with cancer. This empowered Carolyn to navigate with resilience and strength through the decisions and uncertainties she faced.