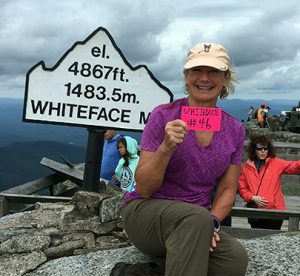 On a gorgeous late August afternoon, I sat on the front steps of the Wadsworth Library in Geneseo to interview Jerri. It seemed fitting to be talking with her outside as she is an accomplished athlete whose favorite ‘arena’ is the great outdoors. In her words, she has had the best year ever! Not only did Jerri manage to finish climbing the 46 Adirondack High Peaks that remained on her list, she also rode the Bon-Ton Roulet which is a 402 mile, seven-day bike tour through the Finger Lakes region.

Jerri deserved a year like this. An avid bike rider, she can be seen riding on any and all roads in Dansville and surrounding areas in the Southern Tier. She has quite a collection of bikes, and the smile on her face when she talks about them is just beautiful. Last year, however, Jerri suffered some serious injuries in a bike accident that left her with a broken back and pelvis, as well as a concussion. In true form, she came back from these injuries to have her best year ever. This is a theme for Jerri. Her ever-present positive attitude and smile are contagious.

Jerri’s resilience was put to the test in August 2016 when she was at her annual gynecologist appointment. Until this day, her breast exams had been normal, but this time was different. Her doctor discovered a small lump in Jerri’s breast and promptly sent her for imaging. She had a mammogram, which didn’t show any areas of concern. But because her breast tissue was dense, Jerri underwent an ultrasound as well; this showed not one but five small masses. A biopsy was performed that day in the doctor’s office.

The biopsy results revealed that Jerri had multifocal estrogen-receptor-positive (ER+) breast cancer, stage 1. (In multifocal breast cancer, multiple tumors arise in the same area of the breast. About 80% of all breast cancers are ER+, which means that the cancer cells grow in response to the hormone estrogen.)

When her doctor explained that she had about a 56% chance of her breast cancer recurring, Jerri decided that a double mastectomy would be the best course of action for her. She scheduled the surgery for early September 2016. The procedure went well; the surgeon did find a sixth small mass with the same biology as those that had been previously biopsied. During the surgery, tissue expanders were put in place as the first step in Jerri’s breast reconstruction.

The surgical drains were out in a week and a subsequent reconstructive surgery went smoothly. Jerri didn’t need radiation or chemotherapy treatments, but she began taking Anastrozole, a medication that reduces estrogen levels in the body. While that drug is usually tolerated well, Jerri had a difficult time with side effects, so she was switched to Femara. Both of these drugs are in a class of medications called aromatase inhibitors, which are used to treat postmenopausal women diagnosed with ER+, early-stage breast cancer after surgery to reduce the risk of the cancer coming back.

Jerri had no family history of breast cancer, with the exception of her great-grandmother, whose breast cancer was never discussed. Jerri didn’t have any information about her experience or her treatment. She was, however, concerned for her own children’s health, and decided to undergo genetic testing. The results of the test came back positive for an inherited mutation in the ATM (Ataxia Telangiesctasia mutated) gene. This is associated with increased risk of certain cancers. People who inherit a mutated copy of ATM from one parent are at increased risk of female breast cancer, and possibly pancreatic, prostate, and other cancers as well. Jerri has a clear understanding of what this means for her and her children and gets the appropriate screenings when needed.

Originally from Bath, Jerri grew up in Dansville, where she lives with her husband of 38 years, Tom. As a young girl, Jerri wanted to ride horses as a career. She never quite figured out how to do that, and went to college to become a nurse. In her early years of nursing, Jerri had an experience that would change the course of her career.

One day, she happened to be in the room of a woman who was dying. Jerri felt helpless and unable to offer the kind of support and assistance she felt the woman needed at that time. From that very moment, Jerri knew there had to be something she could do to help people who were dying. Then, when she read an article about a hospice facility in Livingston County, her path became clear.

Jerri worked in hospice care until she retired just after her bike accident. She loved the work. Helping to make the patients comfortable and supporting their families was her priority. Jerri’s two children, now both in their 30’s, often volunteered. Their experience proved to be useful in later years when Jerri’s in-laws were placed in hospice care; her children were able and willing to step right in and help them.

After her reconstruction surgery was complete, Jerri felt frustrated at how slowed-down she felt. She had always been a swimmer, a bike rider, and a weight lifter, and now she had trouble lifting a soup can. Highly motivated to get back to her active routine, Jerri purchased an old-fashioned bike with higher handlebars so she could reach them comfortably and set out on her own self-described road to regain her strength. Now, in addition to hiking, gaining her 46th peak, and her seven-day 402-mile bike ride, Jerri continues to ride whenever she can and hopes to do a 100-mile (in one day!) ride soon.