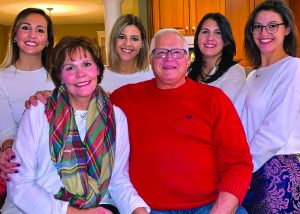 As a twenty-three-year, two-time survivor of breast cancer, Marien Canale is grateful for every day. At the age of forty, she and her husband Mike, already the parents of two young daughters, received the wonderful news that Marien was pregnant again, this time with twins. Marien and Mike were the busy parents of four daughters ages eight, five, and two (the twins), when breast cancer made an unwelcome appearance in their lives.

Marien had gone for her routine mammogram when her doctor told her that a small area of concern had been found. A biopsy of the spot revealed DCIS (Ductal Carcinoma in Situ), an early-stage breast cancer.
Although her own mother had a history of breast cancer, these were words Marien hoped never to hear again. She was in college when her mother underwent a mastectomy during the 1970’s. Her mother did not know if the area was cancerous until she woke up from the procedure. At that time, diagnosis, treatment,and care plans were very different than those of today. Marien doesn’t know many details about mother’s diagnosis, but recalls that her mother did not have any treatments after surgery and lived forty healthy years afterward.

With a rush of emotion and worry, Marien felt she didn’t know where to start in her own journey. Her feelings of uncertainty and fear kept her reserved in speaking out about her diagnosis. Although a neighbor and a school colleague did reach out to her, she struggled to build the confidence to face this new reality. Amidst raising her young children, balancing family and career, and fitting in doctor appointments, she felt overwhelmed and isolated. Back then, Marien says, breast cancer was a taboo topic. She remembers running into people she knew, who were often uneasy and didn’t ask how she was feeling. They waited and asked others for updates.

As she prepared for her lumpectomy and radiation treatments, Marien relied on her family to help her through. Mike came to every appointment with her armed with a notebook to write everything down so the couple could go over it when they got home. The surgery went well; there were clean margins around the lumpectomy site. And Marien experienced no noticeable side effects from her radiation treatments. Afterward, she was given a clean bill of health and continued her life as a Spanish teacher at Geneva High School, her own alma mater, where she taught for thirty-three years.

Eighteen months later, at a follow up mammogram appointment, another suspicious spot was found on the same breast. This time, Marien and her surgeon agreed that the best option was a mastectomy on her right side. After careful consideration, she chose to have reconstructive surgery using the latissimus muscle from her back and a breast implant. This procedure was done at the same time as the mastectomy. (In latissimus dorsi flap breast reconstruction the surgeon uses muscle, fat, and skin from the upper back to create a new breast.)

Because her cancer was fueled by estrogen, Marien took the anti-estrogen drug Tamoxifen for five years after her recurrence and tolerated it without any problems. Her follow-up care now consists of annual mammograms, which have been clear since her second surgery.
Marien recalls being afraid to say she was a survivor; she was nervous her cancer could recur at any time. Then, as time passed, close friends of hers were diagnosed and turned to Marien for strength and support. Through these conversations, she came to embrace the fact that she could say she was — and is — a survivor. She’s amazed at how far the science has come and attitudes about discussing breast cancer have changed since her mother’s diagnosis and, later, her own.

Marien became involved with the Coalition after seeing a Facebook post about a gentle yoga class offered at the Geneva Library for breast and gynecologic cancer survivors. She signed up and has been a regular at the classes ever since. She appreciates having a program close to her home in Romulus and says that yoga has helped tremendously with regaining her range of motion after her surgeries, even all these years later.

The importance of Marien’s family life, their assistance and love when she most needed them, along with her faith and prayers, helped get her through the difficult journey. Although side effects from the surgeries, treatments, and medications were minimal (including rashes, numbness, and body aches), Marien says those symptoms were nothing compared to the internal emotional stress she endured. Her life has been forever changed. She has found that personal strength is displayed in various ways.

Marien feels that although she is often perceived as easy going and calm, her inner strength is fierce! She is living proof that one should “never mistake kindness for weakness.”