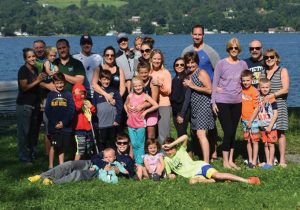 I first ‘met’ Sue Anne when she emailed me at the Coalition to inquire about volunteering. This resident of Canandaigua wanted to do whatever she could to help, whether it was distributing newsletters and brochures or helping at local events. I took her information and made a note to give her a call when I needed volunteers in the Canandaigua area. She signed up for our Mindfulness & Meditation class offered in Canandaigua, then came to the Coalition in January for the annual PALS Mentoring Training. That was when I first met her face to face; I was struck with her vivacious energy. She exudes positivity! That fierce energy and the love and support of her family are what helped Sue through her cancer diagnosis and treatment.

Born and raised in Bergen NY, Sue Anne Gillett went to the Genesee Hospital School of Nursing then continued on to receive her bachelor’s degree from Daemon College in Buffalo. Her first job was as a pediatric nurse at Strong Memorial Hospital. After that, she worked in the newborn ICU at Rochester General Hospital and then at the children’s psychiatric unit at the Monroe Developmental Center.

When Sue married her husband, David, the couple moved to Perry, NY, where he was a teacher. She accepted a position as a school nurse in Wyoming, NY, and stayed there for twenty years. Sue and David have three children, all of whom live in the Upstate New York area. When her grandchildren started arriving, Sue decided to retire so she could spend time with them and help babysit. She and her husband moved to Canandaigua in May of 2017 to be closer to their children and grandchildren.

Just a few months later, Sue’s life changed. Having found a new primary care physician in Canandaigua, she went for her first appointment. In the waiting room, Sue filled out the needed paperwork. During the appointment, her doctor brought up a response to one question on the form. In Sue’s words, her doctor had a ‘fit’ because she had answered ‘yes’ to the question of whether she was experiencing vaginal bleeding. Sue had been experiencing some bleeding in the previous couple of months, but thought it was due to the stress of having just moved. She had also been losing weight and experiencing some fatigue but chalked this up to the recent move as well.

The doctor ordered an ultrasound, which took place in November of 2017. A 4-centimeter uterine mass was discovered, which came to be diagnosed as an aggressive type of endometrial cancer. Shortly afterward, Sue underwent surgery to have a total hysterectomy to remove the mass. Much to her relief, she learned her cancer had not spread to any lymph nodes.
Afterwards, Sue underwent six rounds of chemotherapy and three rounds of internal radiation; she tolerated all of her treatments well. When her hair began to fall out, some friends accompanied Sue to her hairstylist (who happens to be her best friend) to have her head shaved. Her hairstylist/best friend wanted to help so much that Sue ended up with eight wigs!

Having always led an active lifestyle, Sue loves to go the YMCA in Canandaigua. She swam and did aerobics all through her chemo treatments, sporting a baseball cap in the pool to cover her bald head. Soon, other people in her class began wearing baseball caps to show their support for her. Sue says that swimming helped lift her mood and soothe her body aches.

During her treatment, Sue had a great deal of support. Friends from Perry contacted her to ask how they could help. Her family, of course, was right by her side throughout her walk with cancer. And during chemo infusions, Sue always had a friend or two to keep her company. She avoided support groups while in treatment because she was nervous about her susceptibility to germs and illness. However, Sue has since discovered that although she’s finished with treatment, it’s empowering to talk to other survivors about their shared experiences.

Sue visits her oncologist’s office every three months for monitoring and bloodwork but has not experienced any issues since her surgery and treatment. She credits her active lifestyle for her continued good health. Having returned to babysitting her grandchildren, Sue is focused on moving forward with her family.