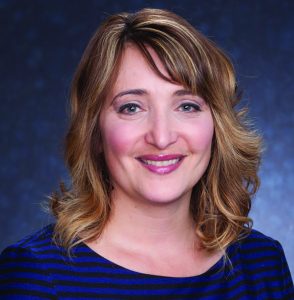 Jessica Salamone, ScM, CGC, is a familiar face to many in our community. A board-certified genetic counselor since 2005, she has served as the Director of Genetic Counseling and Cancer Risk Assessment at Elizabeth Wende Breast Care in since 2012. As an adjunct faculty at Rochester Institute of Technology (RIT), she teaches medical genetics and introductory genetic counseling courses. She graciously agreed to an interview for our publication.

PB: The role of genetics in cancer is a topic of very high interest to our survivor community. What’s new in this rapidly evolving field?

JS: I think that historically, genetic testing was an afterthought. You were diagnosed with cancer, you made it through treatment, and then at some point you might think, “Maybe genetic testing will help me for the benefit of my children.” I’m proud to say that the culture is changing. Many surgeons will think about genetics before they have a plan of attack created. I’m seeing many women within twenty-four or forty-eight hours of their diagnosis, and they really understand genetics at the front of the journey, when it’s going to potentially be helpful in the long run. I think that’s been the most fascinating change of maybe the last two or three years.

PB: Are there specific situations where genetic testing might be suggested?

JS: There are standard guidelines. If the cancer is happening in a young woman, or there are repetitive cancers within a family, or rare cancers, these are the three characteristics. Young is defined as age forty-five and younger. If you have no family history and you’re younger than forty-five, genetic testing is indicated. If you’re a little older than that, then having some family history is important. If you’re between forty-six and fifty but have one other relative with breast cancer, or if you’re fifty or older and have at least two relatives with cancer, those are the scenarios where, no matter what, your insurance will pay for it. The rule is one family member under forty five, two under fifty, or three at any age.

Let’s just say you’re forty-nine with breast cancer and you have one other family member who’s been diagnosed. That doesn’t mean genetic testing isn’t warranted. You’re still young. Your insurance may not pay for it, but there are many affordable ways to be having those conversations and to approach genetic testing.

There was a journal article a couple years ago about a study where they took a group of women who met those criteria – young, repetitive cancers – and they took (I’II always tease) little old ladies with breast cancer, which is devastating but doesn’t meet the criteria. They tested five hundred women genetically in each category and didn’t find much difference in the test-positive rate. And that’s why I see the transition in my patient population – their doctors automatically are referring for genetics right away.

PB: What are some of the common mutations associated with increased risk of breast or gynecologic cancer?

JS: The BRCA genes are the most common – BRCA1 and BRCA2. BR stands for breast, CA stands for cancer. Up to about one in three hundred Caucasians carries those genes. Those are the most high-risk genes. They do cause breast cancer; they also cause ovarian and in some rare cases, uterine cancer. They can cause prostate and melanoma and pancreatic cancer.

Then the three next-important big players are genes called CHEK2, PALB2, and ATM. Those are implicated in a moderate risk of breast cancer. BRCA will pull a woman up into an eighty-five to eighty-seven percent chance of breast cancer. CHEK2 is about forty-eight percent, ATM is about fifty-two percent, and PALB2 is about fifty-eight percent. BRCA gets all the press, but that next group of genes is really important as well.

That’s only five genes. We test for dozens of genes at any given time.

PB: When someone is considering genetic testing, a good first step is genetic counseling. What’s involved in that?

They’re going to want to know about blood relatives only. And they’re looking for any of those telltale signs: relatives with cancer, people who had repetitive cancers, young cancers, rare cancers. They might also ask you for history about yourself. Then the counselor is going to start sharing what they’re noticing within the family and what risk factors might be leading to that diagnosis.

What they’ve experienced could be the result of one of three things: Sometimes cancer is due to aging. We will also talk about environment – maybe a person smoked or drank to excess. It’s hard to think about people’s behaviors causing cancer but they can. And then ten percent of the time, it’s genetic. If we think it’s a gene, let’s decide if you want to test.

I think one of the biggest fears people have is that they’re going to talk to somebody who will try to talk them into the testing. That’s not my role. A good counselor is going to help you see the pros and cons of both options.

PB: One concern about genetic testing is the effect it might have on insurance rates. Would you speak to that?

JS: Our local late Congresswoman Louise Slaughter penned a federal law in 2007 with a revision in 2008 called the Genetic Information Nondiscrimination Act. In the category of medical insurance only, it is meant to protect Americans from being discriminated against at the federal level. There are not such protections around long-term care, disability, short-term disability, life insurance.

One of the things I want people to think about is whether they already have a term policy where the rules can’t change before entering into genetics. It’s different for people who do not have that coverage in place. You are covered by HIPAA and confidentiality rules. I cannot share your test results with any third party without your permission. However, if one of those companies is asking if you or a member of your family had genetic testing, I do have to answer honestly. If you’re signing up with a company that doesn’t ask anything more than how much you weigh and whether you smoke, then they can set a policy based on that. They may not ever ask about genetic testing.

I don’t think there’s a lot of reason for concern. But I do think it’s worth a conversation to say “What kind of position am I in?” You need a balanced approach.

PB: What do patients and families need to know if an increased-risk mutation is found?

JS: We need to think about how we are related to our relatives. You share half of your DNA with your children whether they’re male or female. So if I’m talking about a breast-colon-prostate gene, your daughters and your sons are at risk under that example. You would want to be sharing that information with your children equally. Your kids have a 50-50 shot; your siblings have a 50-50 shot, so you can be sharing information there. If your parents are still alive, we have scenarios where we test “up” too, to figure out if it came from mom or dad in that circumstance.

PB: What is the difference between the types of genetic mutations that you find through testing as compared to the mutations that cause cancer to starting to grow in the first place?

JS: In my area of medicine, I am looking for inherited mutations – something that came from the generation before that I’m going to pass on to my children.

Then there is testing of the tumor such as oncotyping to figure out type and aggressiveness and likelihood of recurrence, and what treatment it is going to respond to. All cancer is going to have some kind of genetic change. It doesn’t mean that the person got that genetic change from the generation before. There’s still a genetic alteration within that cell, but it’s not going to be passed along to the next generation.

There is also genetic testing happening through 23andMe and Ancestry.com and all of those; it’s really just the difference in the level of testing. It doesn’t mean that those tests aren’t important and can’t uncover something, but it is nowhere near as comprehensive as coming to a clinic. I always want patients to do that kind of testing with the understanding that it has its place, but we don’t base clinical judgements or decisions on it.

PB: The whole area of genetics and cancer is so complex and interesting, and I’m wondering what drew you to this field?

JS: I always wanted to help people. And I was always drawn to medicine. The words “genetic counselor” did not enter my life until I was in my second year at RIT and they had a career panel where a genetic counselor spoke. And I said (Hallelujah Chorus), “That is what I want to be!” But there was writing on the wall long before that.

When I was in high school and took one of those aptitude tests that say what are you going to be when you grow up, mine said, and I kid you not, in this order: doctor, teacher, social worker. And now, I laugh and go, “That’s it!” The umbrella term is genetic counselor. Doctor – you’re communicating or diagnosing or helping. Teacher – you’re one-on-one educating a patient, educating a community, educating providers… And social worker – my shoulder gets cried on a lot because I’m right in the trenches with people.

I also have a family member with a genetic disorder. When I was young, I was able to attend some appointments. I didn’t know what I was experiencing was genetic counseling, but that’s what it was.

I don’t ever leave a day not feeling the huge impact that my words can have on people. That’s not something I take lightly. I go home knowing that people entrusted me with a very big, personal, important part of their life, and to let me walk with them and have that burden with them is really a gift.

This story appears in the Spring 2021 edition of Voices of the Ribbon newsletter. 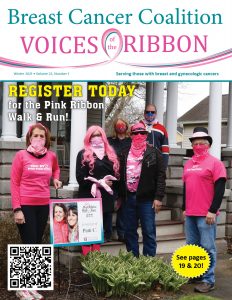