Voices of the Ribbon Interviews

This interview was first published in “Voices of the Ribbon,” the Breast Cancer Coalition’s newsletter, Summer 2020 edition. This issue and others can be found here.

QUESTION: Thank you for sharing your knowledge about HER2 positive breast cancer with our community. What work have you done regarding this disease subtype?

Dr. Falkson: I was part of the group that found the HER2 protein, which is overexpressed in about a quarter of breast cancers. It was very exciting when a monoclonal antibody called Herceptin, or trastuzumab, was developed because it targets the HER2 protein exclusively. An antibody is like a little targeted missile; it goes for a specific protein and causes cells that express it to die.

I was involved in a trial run by the Breast Cancer Research International Group, or BCIRG, a translational research organization. (BCIRG)006 was one of the pivotal trials that changed the standard of practice for the world in treating HER2 expressing breast cancer. The data were presented back in 2005. We found that adding trastuzumab to chemotherapy significantly improved the response rate for patients with early stage HER2 positive breast cancer. Since then, I have been and am still involved in many other trials targeting HER2.

QUESTION: What does HER2 positive breast cancer means for people who receive this diagnosis?

If the tumor’s already been removed surgically, we look at the pathology information and, based on that, often recommend chemotherapy along with trastuzumab. For those that are hormone receptor positive, we recommend estrogen-blocking therapies as well.

Currently, with the COVID-19 situation, we’re also looking to see if we can postpone surgeries and start treatment with systemic therapies until this pandemic is over. We try to keep people out of the hospital, basically.

One of the things we’re looking at is giving patients a drug called TDM-1. Its other name is Kadcyla. They’ve taken this trastuzumab molecule and attached the chemotherapy drug emtansine to it. The idea is that the chemotherapy delivers a bigger payload directly to the targeted cells. It’s been extensively tested in patients with stage four disease and we have some information about using it in earlier stage breast cancer. At this time, the breast cancer medical community feels it’s safe to give that as an alternative to chemotherapy plus trastuzumab for patients with early stage HER2 positive breast cancer. TDM-1 has advantages in that it causes white blood cell suppression, so it doesn’t affect the immune system the way chemotherapy does. A lot of patients do quite well and don’t need any kind of anti-nausea medications. It’s not universal that people lose their hair.

It might be a silver lining to what we’re going through now; we are forced to look for other treatments that may have less toxicity for our patients and are still as effective.

QUESTION: How does HER2 positive breast cancer compare to other forms of the disease?

In early stage disease – that’s stages one, two, and three – a large percentage of those patients can be cured by means of combination therapy: targeted HER2 therapy, chemotherapy, and surgery plus or minus radiation therapy. However, if the cancer has spread outside the breast and regional lymph nodes – in other words, if it’s spread anywhere else in the body – that’s what we call stage four or metastatic breast cancer. Metastatic HER2 positive breast cancer is not a curable condition, but it is treatable with targeted therapies, and we’re seeing a significant improvement in median survival. This is very, very encouraging. We have treatments to keep the disease in control while extending patients’ quality of life and duration of life.

QUESTION: I’ve read recent reports about discoveries in the treatment of metastatic HER2 positive disease. Are there new treatments on the horizon?

Dr. Falkson: New drugs are being developed all the time. This is very exciting because new treatment options are being brought forward. What happens in HER2 positive metastatic disease is that you start with one kind of targeted therapy or combination of treatments and the cancer cells eventually become resistant. Then you have to find new options. That’s why it’s important, if you can’t eradicate the cancer completely, to have a pipeline of other medications that can be used in place of the ones that have stopped working.

Monoclonal antibodies such as trastuzumab are given intravenously, and there are oral kinase inhibitors that target some of those HER2 receptors as well. The most common one is known as lapatinib [Tykerb] and there’s another one called neratinib [Nerlynx].

More recently, a drug called Enhertu has gotten such good results, it was also recently approved in stage four disease. Like TDM-1, it’s trastuzumab with a chemotherapy molecule attached. The technical name is fam-trastuzumab deruxtecan.

The most exciting new agent is called tucatinib [Tukysa]. In a study called the HER2CLIMB trial, metastatic HER2 positive breast cancer patients who were previously treated with trastuzumab, pertuzumab (Perjeta) and T-DM1 received trastuzumab and a chemotherapy drug called capecitabine [Xeloda] plus or minus tucatinib. They found significant improvement in the three-drug combination. This study is being taken further by a group called Seattle Genetics.

I met with another pharmaceutical company recently to talk about a new drug in the pipeline. I think we’re going to see more of these targeted therapies coming out and being useful.

QUESTION: Do these or other recent developments have implications for those with early stage HER2 positive breast cancer?

Dr. Falkson: Traditionally, the way we’ve developed trials is to see if something works well in metastatic disease. If it does, then we think, “Wouldn’t this work even better if we gave it to patients when they have early stage disease?” Certainly in the future we will be looking at tucatinib in the neoadjuvant situation to see if it has a benefit for early stage breast cancer. There has been some indication that neratinib benefits certain patients that have hormone receptor positive, HER2 positive early stage disease.

For some of my patients with early stage HER2 positive disease, once they’ve finished their chemotherapy and trastuzumab, I’ve continued to give them a year of neratinib with hormone therapies to help prevent a recurrence in the future.

Pertuzumab, which I mentioned previously, has been used widely in early stage and metastatic disease. It binds to a different area of the HER2 protein than trastuzumab, and the two drugs are often given in combination.

When deciding which therapies to use for any particular patient, it’s always a matter of risk versus benefit. You want to prevent the cancer from coming back, but you have to match the cure to the disease.

QUESTION: What do you feel is important for those recently diagnosed with HER2 positive breast cancer to know?

Dr. Falkson: Do your homework; don’t sit back and wait for weeks or months after your diagnosis, but certainly do your homework. I usually recommend that, if patients can, they should go to a center that specializes in breast cancer and follow the recommendations of their oncologist. Ask if there are any clinical trials going on because, until we get to a one hundred percent cure rate with zero percent side effects, there are always opportunities to do research and improve what we’re doing. At the moment, ninety percent of patients with early stage breast cancer will never have their disease return, but there are still some side effects.

I think it’s important to note that, as we discussed earlier, HER2 positive breast cancer used to be difficult to treat but we now have very good treatments for it. So there’s a lot of hope. There are lots of reasons for optimism. 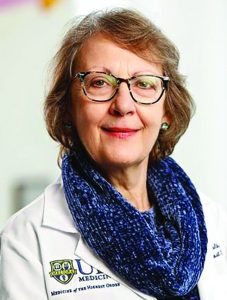 Dr. Carla Falkson is a medical oncologist at the University of Rochester who came to our region from the University of Alabama at Birmingham. A practitioner whose breast cancer patients represent all facets of the disease, Dr. Falkson is originally from Pretoria, South Africa.

After she graciously consented to an interview for our newsletter, our intended face-to-face conversation became a zoom meeting due to COVID-19. Undaunted, we were able to speak in depth about a topic of interest to Dr. Falkson: HER2 positive breast cancer. This is a subtype of the disease in which the cancer cells have too much of a protein called human epidermal growth factor receptor 2 (or HER2).

Another area of interest for Dr. Falkson is translational research or, as she termed it, “…bench to bedside medicine.” She participates in a number of clinical trials and applies her knowledge to treat breast cancer patients across the wide spectrum of the disease.