New Development in Treatment: Sorting the Wheat from the Chaff

Last December, clinicians, researchers, and patient advocates gathered at the San Antonio Breast Cancer Symposium (SABCS) to discuss the results of numerous ongoing breast cancer studies. In the search for information that is meaningful to patients, sifting through the abstracts and presentations from this highly-regarded annual symposium can be a daunting task, not unlike the proverbial needle-in-a-haystack conundrum.

But there is help for lay advocates reading about advances in breast cancer treatment (or treatment of any disease or condition). Whether that information comes in the form of original research articles or the news releases that often follow them, it’s important to consider the quality of the evidence being presented.

When measuring the effectiveness of a new drug, researchers take a number of factors into account such as:

Other considerations to take into account when reading research reports and news stories include the side effects of the new drug and their impact on quality of life, as well as the cost of the therapy. Extended survival in the absence of a meaningful quality of life is not a welcome prospect for many. And the financial toxicity of cancer treatment has long been a bone of contention among patient advocates. Many medical providers, insurers, and researchers are paying attention to this as well. Still, cancer remains one of the most expensive diseases to treat in the United States.

Case in Point: the HER2CIMB Study

A number of reports emerged from the 2019 SABCS. Many involve the results of phase I and II trials and the promise of further investigation they contain, pointing the way to potential advances in breast cancer treatment of. But the results of one phase III study reported at the symposium may have more immediate ramifications for those with HER2 positive metastatic disease* that has stopped responding to other therapies.

In late 2019, the results of a trial called HER2CLIMB were reported at the SABCS. This randomized, double-blind, placebo-controlled, phase III clinical trial enrolled 612 patients at 155 sites in 15 countries with locally advanced or metastatic HER2 positive breast cancer. All had experienced disease progression after at least two previous lines of HER2-targeted therapy. Significantly, nearly half of patients in the study had brain metastases, a group that is poorly represented in many clinical trials. Subjects were randomly assigned to receive the chemotherapy agents trastuzumab and capecitabine with or without tucatinib. which is an experimental tyrosine kinase inhibitor that targets HER2 receptors.

Tucatinib improved overall survival as well as progression-free survival when compared to the control arm, and these results included those with brain metastases. The most common side effects were diarrhea, hand-foot syndrome, nausea, fatigue vomiting, and reversible elevation of liver enzymes. About 6% of study participants discontinued the therapy due to side effects, compared to about 3% in the control arm, and the researchers concluded that tucatinib is well tolerated by most.

These findings led the researchers to unblind the study and offer tucatinib to all the patients enrolled. The drug’s manufacturer has applied for and received FDA approval of the medication for all HER2 positive metastatic breast cancer patients with previously treated disease. However, the cost of tucatinib therapy is unclear at this time, and it remains to be seen whether those in financial need will have access to this therapy.

For those dealing with a breast cancer diagnosis, new treatment options can offer hope. The challenges are to know which reports about new therapies actually represent a step toward that hope and to ensure patient access to these therapies. Health News Review (healthnewsreview.org) contains helpful criteria and questions to ask when reading news in the media.

But the questions that arise immediately after a diagnosis deserve equal attention. “How did this happen?” and “Will I survive?” speak to survivor concerns about primary prevention of the disease as well as understanding how to halt its spread. As we at the Coalition seek answers to these questions, we will keep paying attention to developments in treatment, knowing that breast cancer will not end until we can prevent it from happening in the first place and/or stop if from metastasizing if it does occur.

* In approximately 20 percent of breast cancers, the tumor cells have too much of a protein called human epidermal growth factor 2, or HER2, on their surfaces. With an overabundance of this growth factor, these cells tend to grow and spread quickly.

This story appeared in the Spring 2020 edition of Voices of the Ribbon newsletter.

Our Summer 2020 issue is on the stands now and available on our website. 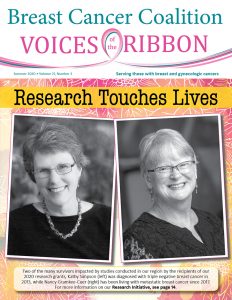