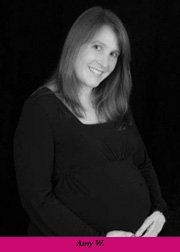 My journey began early one morning in late October 2006 as I awoke with my finger resting on a pea-sized lump.  I called that morning to have it evaluated.  While medical professionals were certain that it was nothing, they did encourage me to have additional testing.  I was diagnosed with invasive ductal carcinoma and ductal carcinoma in situ at age 34, the mother of two young children and breastfeeding.

So began my year of cancer in which I underwent diagnostic testing, a lumpectomy, a single mastectomy with reconstruction, 12 weeks of Taxol and a year of Herceptin.

I was asked to be photographed for the Lives Touched wall at the BCCR in the summer of 2009 when I was newly pregnant with my third child.  It was almost 3 years since I had found that little lump.  When I was diagnosed with breast cancer, I wondered if I would ever be pregnant again.  I had hoped we would have a third child, but breast cancer can change things.  When I reached the two year mark after my lumpectomy, I was given the ok to conceive.  Becoming pregnant again and undergoing the changes in my body gave me a concrete sense of normalcy.  Even though I had experienced my prior pregnancy only five years before, it felt like a lifetime ago. A new baby is hope and a new beginning.  My daughter, Kessa Quinn was born on March 29, almost three years to date after I had my first infusion of Taxol and Herceptin.

The Breast Cancer Coalition has been a part of my life since those initial days of uncertainty back in 2006.  I am a researcher by nature and sought out information to aid my decision process regarding treatment.  The BCCR was one of the resources I used to learn about breast cancer.  In addition, getting to know other women diagnosed with breast cancer and sharing experiences can be so important.   I have participated in events sponsored by the BCCR such as the Young Survivor Soirees, the Pink Ribbon Walk, many evening seminars, Brown Bag Lunch and have volunteered at information booths and as a PALS mentor.  Facilitating the Young Survivor Networking Group along with Miriam Iker has been a special role.  Getting to know other young survivors and discussing the unique challenges presented to us has been a rewarding experience.