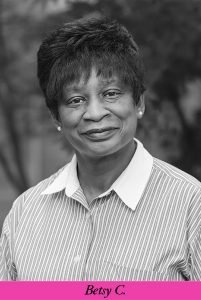 As an avid walker, I would walk pass Assemblyperson Susan John’s office every day. One day in May I walked inside the building looking for the BCCR to register as a participant in the Pink Ribbon Walk & Run Fundraiser. I wanted to walk for those women who had been diagnosed with breast cancer. I did not know four years later I would be a Breast Cancer survivor.

I had always been proactive about my health and I scheduled my annual mammogram every October. I don’t remember why I deviated from having my mammogram in October 2016 but I missed it. I met with my PCP and even my PCP mentioned I had not had a mammogram. I scheduled one for December 2016; I did not know then that my life would change so drastically. I was told there was a lump on my left breast and a biopsy was the next step. I was told this procedure would take less than an hour and I could have it done during my lunch hour and return to work so I scheduled a biopsy the following week.

I was diagnosed with stage one breast cancer which began my journey as a Breast Cancer Survivor. These were the persons I walked for at Charlotte Beach and then at Genesee Park each May. I did not know I would also be a survivor. After my diagnosis the phone calls began to come in at a fast pace. I felt as if I was bombarded with appointments, one after the other. I would get phone calls from the doctors’ offices to schedule these appointments. I felt like I had lost control of my time and needed to take back control. I called the various medical and doctors’ offices and reschedule all my appointments to fit my schedule. I felt empowered and an overwhelming feeling of comfort and ease. I even scheduled an appointment for a second opinion regarding my surgery and treatment. February 2017 my journey was underway; a mastectomy, April begun breast reconstruction and in May began my chemotherapy for several months.  During my chemotherapy I spoke with the hospital Social Worker who told me about BCCR.

During this time of self-care and time away from work I participated in the BCCR support programs: Brown Bag sessions; Surviving & Thriving on Aromatases Inhibitors; Gentle Yoga (twice); Voices & Visions Writing Workshop; PALS Training; Evening Educational Seminars, and the Annual Advance Breast Cancer Seminar. I was asked by Holly Anderson to speak at the Advisory Board Committee meeting and to share my story and afterward the honor of being asked to join the BCCR Advocacy Committee.  I have been enlighten by this experience that I have a future and blessed by all the persons who advocate at every government level on behalf of those who are fighting for their futures. Thank you BCCR for inviting me to join so many others on the Lives Touched Warrior Wall.