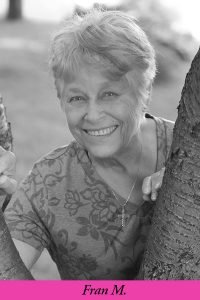 1995 was a difficult year for me as my husband was diagnosed with a very rare form of cancer in March after he had surgery. Where he had the tumor, the size of it, the surgeon told us 99% of them were benign. Jack was one of the one in 2 million that was unlucky; the cancer could not be treated by chemo or radiation. He retired on July 1, 1995, and died on July 11. We were fortunate to be able to care for him at home as he didn’t want to spend his time in the hospital or a nursing home. Our youngest daughter, Mickey, was able to work part-time so she was could help me with his care. We did have a nurse come in twice a week to help with his IV’s and his pain medication. It was difficult to watch an active 170# man go down to 99# in that 3-month period. The type of cancer (Stromal) he had can now be put in remission. We learned to enjoy every moment of that time.

My own journey with cancer began around the end of 1995, 4 months after my husband died. In November I discovered a lump in my right breast that had changed. As our 5 children were still having a difficult time with their father’s death, I decided to wait until after Christmas to make my appointment for a mammogram at Wende Logan’s Breast Clinic. I had it checked the first part of January 1996, because I was so insistent that it was malignant, Dr. Roux did the mammogram, ultra sound, and a needle biopsy sending it stat to the hospital (Strong) to be checked, saying we would have the results by 1 pm, that was 11:30 am. As I had gone to the appointment alone, Dr. Roux wanted me to call someone to come get me to take me to lunch. I called my daughter, Mickey, at work, when her secretary answered, I told her where I was, started crying and said cancer. Lori brought Mickey right over, we 3, went to lunch which none of us could eat. They gave me a pep talk saying it wouldn’t be cancer.

When we returned to see Dr. Roux at 1pm, I knew from the look on her face, I was right, I did know my own body. She told us to find a surgeon and have the surgery as soon as possible. Mickey’s college roommate’s mother worked at Strong, so Mickey called her to see who she would have if she just found out she had breast cancer. Dena’s mother gave us the names of 4 surgeons who did that type of surgery. We scheduled appointments with the four surgeons for the following week to see whom we would be comfortable with. Our last appointment was with Dr. Andrus, who took the time to explain the procedure and the options open to me. At the point Mickey told him her genes were not very good, he turned from me, looked at her, and said, “I don’t see anything wrong with your jeans”. We then explained that her father had died in July of a rare form of cancer. Mickey was working undercover that day, so she had jeans on. I opted for a lumpectomy, which was done on February 14, 1996, 12 lymph nodes were removed, all were negative. Praise God. As soon as I was healed from the surgery, I started the three (3) months of radiation, then went on Tamoxifin for a little over five years. At the time I started the Tamoxifin, the protocol was to be on it for 10 years, then the new guidelines came out for the 5 year period.

In November of 2002, I discovered a new lump in the same right breast, which turned out to be a different type of cancer. After another mammogram, ultrasound, and needle biopsy, I was notified the day after Thanksgiving 2002 that it was cancer, and told to immediately contact my surgeon, which I did. Dr. Andrus saw me the following Monday at 1pm. We decided a mastectomy was the best option; I wanted to have my other breast removed at the same time, but as it was a healthy breast the insurance would not cover it. I opted not to have reconstruction. It seems that each time I feel unusually well, something else (cancer) pops up somewhere else. It is a chronic disease.

August 6, 2006 when I went for my checkup with the radiation oncologist, she hurt me when she examined my back. Dr. Ling thought it was because her hands were cold that I moved. She said “she would schedule me for a CT Scan, Bone Scan, and then an ultrasound. I told her I planned to leave to go to Colorado on September 20th to visit family who were celebrating their 60th wedding anniversary, and no matter what showed up, I was going for at least 10 days. On August 17, 2006 I was told the tests were suspicious, and she wanted me to have a bone biopsy on the T-2. I had the bone biopsy done on 8/23/06. I had 12 treatments of radiation ending on the 13th of September, giving me a week to recuperate before flying out on the 20th. Someone was watching over me to have everything to fall in place to be able to attend the 60th anniversary celebration. I promised I would be back on October 2 to start more radiation if I needed it, the radiation on my back was from the base of my skull to T-5 at that time. That was when my massage therapist, Jolene was doing an internship at the BCCR; she told me about the great group of ladies that worked there and the programs that were available to survivors. That was when I first knew about BCCR and attended the Brown Bag luncheon, and did some of the other programs for metastatic breast cancer.

In 2007, I had Radiosurgery on the T-6. The following year, out of concern for my two daughters and three granddaughters, I went for genetic testing. In November 2008 I, thankfully, tested negative for the BRCA genes. December 29, 2008 I had a rod inserted in my right femur to stabilize it, then a massive dose of radiation on that area on January 12, 2009. In November of 2009 I had 4 series of radiation on my left femur to help with the pain.

Throughout this whole process I’ve met some wonderful people, excellent doctors, made new friends, learned you have to be your own advocate, be thankful for each, and every day God has given us. I have always been very independent but have learned to accept help when it is given. Several of my friends have had breast cancer and I’ve counseled them. I’m active in my church, and Rotary, who with my family and the Lions Club sponsor the Jack Mann Memorial golf tournament for my husband for scholarships in Nunda and Canaseraga for senior students who are going on to further their education. My family has grown much closer throughout our cancer journey that is still continuing. Prayers, love of and from family, and a positive attitude has brought me this far.