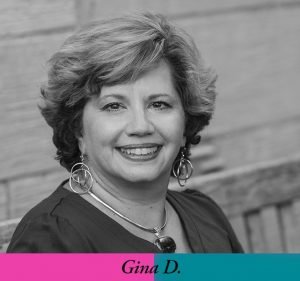 My cancer journey originally began in 2008 when I was diagnosed with triple negative breast cancer. Through genetic testing, it was discovered that I carry a mutation for the BRCA 1 gene. I went through four months of chemotherapy followed by a bilateral mastectomy.

12 years later, I noticed unusual pain with walking. I met with my doctor and insisted on an ultrasound. The ultrasound showed I had a very large mass on my ovary. The routine ultrasound checkups I had been going for never showed anything before.

My doctor referred me to a gynecologist oncologist that specialized in treating those with BRCA mutations. When I met with her, the tumor had already grown in two weeks. The decision was made to operate as soon as possible. Hysterectomy surgery went well and the tumor was removed. The tumor was reviewed and determined to be pre-cancerous, but later my surgeon informed me through a tele-health appointment, that it was stage 1 ovarian cancer.

Considering both the ovarian and breast cancers, my oncologist through it would be wise to have chemotherapy to ensure that the cancer was taken care of. This therapy took place in May and June of 2020. Scary times…dealing with a pandemic in addition to cancer.

My friends, family, and workplace were my support system. I had been through chemotherapy before, so I thought this time shouldn’t be a problem. I felt fantastic after surgery and even while going through the chemo treatments. The worst part was that my family and friends could not really be with me like there were before due to the pandemic. My husband could only drop me off for surgery and chemo. It was hard on my family.

Toward the end of my recovery from surgery, I was able to join yoga classes through the Breast Cancer Coalition via Zoom. Everything had been shut down, but once Zoom was the new normal, it was great to be part of the Coalition again. I always feel comfortable there, and enjoy meeting others who have walked the same paths. I joined the Coalition finance committee a few years ago, and recently joined the Board of Directors. It has been a great experience, and the best part is seeing all the people the Coalition has touched.

I am very fortunate to be a two-time cancer survivor! Without the support of my family, friends, and the Coalition, it would not have been as easy to get through.