The immune system is delicately balanced and highly complex. Researchers are continually discovering new ways to harness this intricate system to stop certain cancers in their tracks.

One important feature of the immune system is its ability to distinguish normal, healthy cells in the body from those that are “foreign.” The system is then able to respond by sending T-cells to destroy the invaders while leaving the normal cells alone. To determine which cells should be eliminated, the immune system uses immune “checkpoints.” These are molecules on certain immune cells that need to be activated or inactivated in order for an immune response to begin.(1)

One of these checkpoint proteins is called programmed death protein 1, known as PD-1. It keeps “killer” T-cells from attacking healthy cells by attaching to a protein called programmed death ligand-1, or PD-L1, which is found on the surface of healthy cells and certain cancer cells. When PD-1 binds to PD-L1, T-cells receive the message to leave that cell alone. Some cancer cells test positive for the presence of PD-L1, meaning they have higher than normal amounts that protein; they “overexpress” it. This serves to camouflage them from an immune attack. 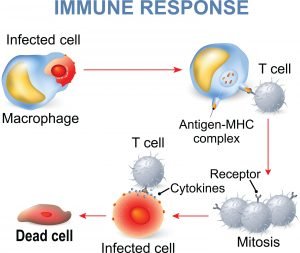 Both PD-1 and PD-L1 are overexpressed in a significant percentage of cervical cancers, making them potential targets for a class of immunotherapy drugs known as PD-1/PD-L1 inhibitors.(2)

These therapies are making their way into the mainstream. In October 2021, the FDA granted approval to a PD-L1 inhibitor called pembrolizumab (brand name Keytruda) in combination with chemotherapy as a first-line treatment for those with persistent, recurrent, or metastatic cervical cancer. This approval is based on the results of a phase 3, multicenter, randomized, double-blind, placebo-controlled clinical trial called the KEYNOTE trial. The results showed both progression-free and overall survival to be notably longer with pembrolizumab than with placebo among study participants who had a PD-L1 combined positive score of 1 or more. This score reflects the number of PD-L1–staining cells in a tumor sample divided by the total number of viable tumor cells, multiplied by 100.

Cervical cancer is usually slow-growing and may not have symptoms. It is almost always caused by human papillomavirus (HPV) infection. Fortunately, it is easily detected at early, curable stages with regular Pap tests. While screenings and preventive vaccines have resulted in declining rates of the disease, cervical cancer continues to affect many people throughout the world. In the U.S., early estimates show nearly 14,500 new cases of invasive cervical cancer and almost 4,300 deaths from the disease in 2021.3 The role of immunotherapy in treating invasive cervical cancer is expanding with the recent approval of pembrolizumab for PDL-1 positive cases of the disease. It offers a treatment option with a lower toxicity profile than chemotherapy that has demonstrably impacted survival rates in a positive direction. Questions remain to be answered about this approach, including the length of time pembrolizumab can be safely administered, its interactions with other therapies not included in the KEYNOTE trial, and the potential role of the treatment in PD-L1 negative cancers.(2)

Finally, pembrolizumab has not been shown to be curative. However, until a cure can be found, it represents a new treatment consideration for many who are currently diagnosed with cervical cancer. And it exemplifies our increasing understanding of the role the immune system can play in the development of cancer and in treating certain forms of the disease.
—
cancer.org/treatment/treatments-and-side-effects/treatment-types/immunotherapy/immune-checkpoint-inhibitors.html
ncbi.nlm.nih.gov/pmc/articles/PMC6367228/
seer.cancer.gov/

This story appears in the Winter 2022 edition of Voices of the Ribbon newsletter.