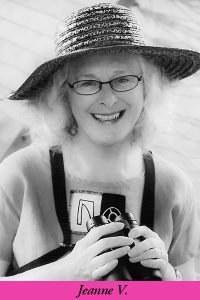 I was diagnosed with breast cancer over Christmas, 1992. We were visiting family in Boston when I got the call from my surgeon following a biopsy the week prior. I wasn’t stunned exactly, because, in a way, I had been expecting to get cancer at some point: both my mother and her twin sister died of breast cancer. I am also a twin. The question I asked was, was my sister and I going to go the way of my aunt and mother? (Fortunately, not. My DCIS was caught at a very early stage, thanks to Wende Logan and her breast clinic, and my sister is still cancer free.)

The day of the call, however, I did not know what all I was facing: lumpectomy surgery, hours spent on my own research on treatment strategies, radiation, Tamoxifen, countless doctor’s appointments. At the time I was a one-person department at a museum. It became clear that cancer was definitely going to be an intrusion on work, and life in general. How was I going to squeeze it all in? Like everyone else, you just do it!

However, I wasn’t quite finished with cancer. In June of 1995, calcifications were again found on a routine mammogram. I had another lumpectomy, but the margins were not clear and a month later had yet another lumpectomy to achieve clear margins. In December 1997, more calcifications were noted and I decided to undergo bilateral mastectomies with TRAM reconstruction. I have been cancer free since that time.

BCCR was not in existence when I was going through my cancer journeys. Cancer Action (later Gilda’s Club) had a monthly support group that I found very helpful. I learned about BCCR a number of years ago. I had not been paying much attention to breast cancer and, for some reason, I felt that I should not neglect to keep up-to-date on breast cancer information. I learned about Brown Bag Fridays. I attended my first one and discovered that just the fact that I am a long-time survivor was helpful to some of the newly diagnosed. I have been coming as often as I can since then. What a source of support and information! Even if, like me, one is not currently going through treatment, the love, laughter, tears, and general uplifting of spirits that one experiences around the table is absolutely wonderful. BCCR does so many wonderful things for the BC community—lectures, annual seminars, yoga, book club, and so much more. BCCR staff embodies the kind of support breast cancer patients need—up close and personal; like family, only a family who actually understands what you are going through! I am currently on the Research Grants Committee and am a PAL. Thanks, BCCR, for being there for everyone!