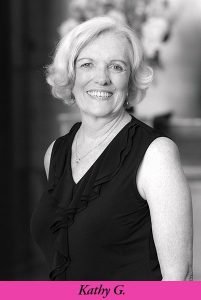 It was a typical day in July 2003, too much work and not enough time. As usual, I had scheduled my annual mammogram for the last appointment of the day. I always waited for my results, so I wasn’t surprised as other patients came and went. I was surprised when I got called back for additional views.  Then I waited and waited. When it got to the point where it was me and the fish in the aquarium left in the waiting room, the anxiety started. Finally, I got called to see the radiologist. She had seen something questionable, so she did an ultrasound. Nothing there, but she wanted to do a stereotactic biopsy. Back the next morning for the biopsy, but again, nothing found. Still, the radiologist was not reassured, and she sent me for a surgical biopsy. The surgeon said that 99 times out of 100 what she saw in me came back negative. When the surgeon called a week after the biopsy and started the conversation with, “Well, it’s a good thing we did that biopsy…”, I knew I had breast cancer, but a part of me didn’t accept it.

I had a lumpectomy a week later and felt good about things. Then another call from the surgeon. I didn’t have clear margins. This was the first time that my rational self told my wishful self that I must really have breast cancer. Certainly, the misdiagnosed breast cancer that existed in my mind would have clear margins! After more testing, I had a re-excision lumpectomy which yielded clear margins, followed by chemotherapy and radiation.

During this time, I continued to work, but had limited energy. When I could, I attended a support group at Highland Hospital. This support group still exists, now under the wing of the Coalition. A few years after my diagnosis, I realized something was missing. I needed to relax, to find peace and to be with people who “got” how I felt.  I reached out to BCCR to attend the gentle yoga program. At first, I had trouble closing my eyes, stilling my mind, accepting the calm. In yoga class, I met others touched by breast cancer. Over time, as I became one of the oldies in class, I hoped that my presence reassured the newly diagnosed.

I retired in 2013 and knew it was time to get more involved at BCCR. I joined the Advocacy Committee, travelling to Albany and Washington, DC, meeting with representatives and supporting legislation. In 2018, I became Chair of the Advocacy Committee and joined the Board of Directors. As a member of the Board of Directors, I am fully engaged at the Coalition, supporting our mission as best I can.

My personal mission remains the same. Be there for those who walk through the Coalition’s door, as others were there for me. Don’t judge, be positive, offer advice only if asked, pay back what was so richly given to me at and by the Coalition. Breast cancer is not something I would wish on anyone, but my breast cancer diagnosis led me to the Coalition and to a life filled with the richness of the people and the essence of the Breast Cancer Coalition.