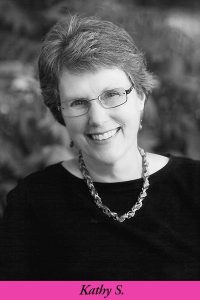 Details of a traumatic event are firmly carved in a person’s memory. I can recall the moment the phone rang and the hours leading up to that call. On August 15, 2013, I was standing in line to order my lunch. Since I had been waiting all morning for the call, I took a paper and pen with me to take notes. When my phone rang, I quickly found a table to sit down and absorb the facts – Triple Negative, stage three and grade three. Through the noise in that public place, the extraordinary compassion of Dr. Radha Iyer, my radiologist, touched me as much as the harsh facts she delivered. I returned to my office, called my partner, cried, and texted Holly Anderson, a dear friend. As a mental health counselor, I had a full schedule of clients for that afternoon and worked hard to get my head in a place to be fully present for the client scheduled for 1:30. To broaden the context, I had just been married the previous month to my partner of 15 years. We had visited my son and his wife in China in April for the birth of their first child, and had visited Israel and Palestine in June. My partner’s previous diagnosis of Alzheimer’s Disease had been determined to be a mis-diagnosis about eight months prior to my cancer diagnosis. We were beyond joyful and filled with gratitude. Then a new chapter began with cancer.

The scans, an echocardiogram, choosing a surgeon and oncologist seemed to exist in a parallel universe. The one constant was dear friend Holly, coaching me and urging follow-up calls to avoid delays from a holiday weekend. My treatment team listened with compassion and explained options and recommendations that helped me maintain a positive and hopeful attitude. The first surgery was for the port, followed by five months of chemo, followed by a lumpectomy and axillary node dissection, and then radiation. I reduced my hours to part-time status and continued to work throughout treatment, except for a few weeks following surgery. It was therapeutic for me to focus on others rather than myself. My medical team is awesome! Dr. Radha Iyer, already mentioned, Dr. Brian Yirnec and nurse Barbie, Amy, infusion nurse, Dr. Christopher Caldwell, Victoria Nugent, NPP, Dr. Marilyn Ling and nurse Peggy. Pluta Cancer Center is awesome. And Dr. Betty Rabinowitz, my PCP.

My 26-year friendship with Holly included supporting her through her cancer experience led me to the Coalition. I had also facilitated various groups at the Coalition and now joined the club no one wants to join. When I needed to be with others “who have been there” I came to Brown Bag lunch on Fridays. The outpouring of empathy, support, and kindness from many, and at times from surprising places, contributes to a deeper confidence that I will have whatever I need to meet life’s challenges. That belief is rooted in faith and a respect for the mysterious ways God’s grace touches our lives.