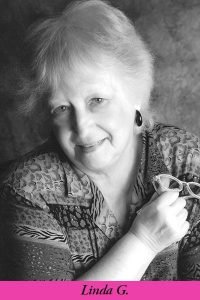 Before breast cancer I was enjoying retirement, children and grandchildren. Doing crafts and enjoying life.

I started chemo about 2 weeks later (27 weekly infusions). After a brief rest, a radical bilateral mastectomy and removal of lymph nodes was done. Radiation was to follow. During the rest period I discovered BCCR’s newsletter and decided to check it out. There was an invitation about a journaling and scrapbooking night and I went to that. That was the beginning of my involvement with BCCR.

I began coming to Brown Bag and to the writing group “Voices and Visions”. I still attend both groups. The staff is so welcoming and caring. The participants that attend the groups are so willing to share and be supportive. I have learned so much. BCCR is a great listening post for all. It is a haven and a sanctuary for me.