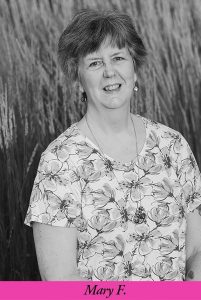 I was diagnosed with infiltrating ductal carcinoma in March 2011. The mass was discovered on a routine mammogram, but was not palpable. I was surprised, but not shocked. I knew others with breast cancer instead of “Why me,” I thought “Why not me?”

I underwent a lumpectomy with removal of two lymph nodes, one of which was positive for cancer. My oncotype score revealed a very low recurrence score and with the help of my oncology team, I ultimately decided to receive radiation but not chemotherapy. Because my cancer was estrogen and progesterone positive, I was prescribed aromatase inhibitor therapy.

Five years later and just two weeks before my son’s wedding, metastatic breast cancer was discovered in my spine and lungs. I was shocked and felt like I had received a death sentence. I spent five days in the hospital to get my pain under control and began radiation on my spine. Happily, I was able to dance with my son at his wedding. I was placed on Ibrance, letrozole, and xgeva, and have had no further growth of the cancer.

I heard about the Breast Cancer Coalition’s group for those with metastatic breast or gynecologic cancers through a Voices of the Ribbon newsletter. I attended a Common Ground meeting because I needed to meet others who could understand what I was going through. I have learned so much from the others that participate about how to live intentionally and with joy. We get together socially outside of the Coalition at our Peeps Pop Ups.

I have taken advantage of additional programs through the Beast Cancer Coalition: Voices & Visions writing workshops, monthly book clubs, and I went through the PALS mentor training. My intention is to give back to the organization that has done so much for me and others going through cancer.

It’s been about six years, and now I am only taking letrozole. I have hard days with pain or concern about the future, but I face it with the support of my husband, the Coalition, and my faith. I embrace each day with peace and hope for the future.