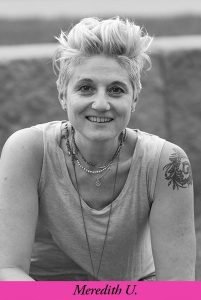 I was 46 years old when a lump was detected during my yearly mammogram. That afternoon as I left work, I joked with my boss that I would have fun at my mammogram. And yet, the joke was on me.

I was diagnosed with Hodgkin’s Disease (cancer of the lymphatic system) at age 16 and received intensive radiation from my neck down to my pelvis. Radiation delivered to the mantle region significantly increased my risk for developing breast cancer, so my yearly mammograms began at age 21. A lump was detected when I was a college senior, thankfully, surgery revealed it to be benign. This scare coupled with yearly mammograms from a young age served as reminders to always be looking over my shoulder, and wondering if or when the other shoe was going to drop.

The afternoon appointment at Elizabeth Wende Breast Care turned into early evening as more images were taken, and a core biopsy performed. While waiting, I called my parents and asked them to meet me. My radiologist was amazingly competent and thorough, and when I asked him point blank, he told me he thought it was cancer. I sobbed while standing in my mother’s arms outside in the parking lot. I received the call Monday. 30 years to the month I was told again that I had cancer. I did not relish telling my 15-year-old son and 12-year-old daughter. I will never forget my daughter’s tearful response, “No, they’re wrong, you can’t have cancer again, you already had it.” I hugged them both tightly and told them the truth- that sometimes it does happen again, and that I was going to fight like I had done as a teen.

The cancer was infiltrating ductal carcinoma, 2.2cm in my right breast. Considering my history, my surgeon and I decided on bilateral mastectomies. I opted to forgo reconstruction with the intent for fewer surgeries. Pathology following surgery showed metastatic carcinoma in two sentinel nodes. Rather than having radiation, I chose to remove the surrounding lymph nodes. Thankfully, no other cancer was detected in these nodes.

I reviewed my diagnoses with my medical oncologist. The tumor was estrogen receptor positive and HER negative, my oncotype score was 11. The next decision was whether or not to have chemotherapy. Studies regarding tumor features like mine statistically showed almost no difference between survival rates of those who had chemotherapy and those that did not. A second opinion confirmed these findings and I opted not to have chemotherapy.

My parents, who had (again) been with me every step of the way, suggested we visit the Breast Cancer Coalition. Mom, Dad, and I sat down with Holly Anderson and explained what the last two months had entailed. Holly listened carefully and supported my decisions. I took comfort in that meeting. I felt the Coalition provided the sounding board that I needed and sought. I left that afternoon with my Pals Pak and the knowledge that I had a place to come again if or when I needed support or resources.

Weeks later, my daughter performed in her middle school musical and I sent Holly a photo of her on stage. She immediately texted back saying how amazing my girl was, and as I sat in that auditorium I felt understood and supported. I knew then that no matter what, I wanted to stay in touch. I had made a friend for life. I knew that the Breast Cancer Coalition was there for me when I needed it. Several years later I was hired by as the Special Events Coordinator and I took pride in knowing that I played a part in helping others like myself. Though I have moved on to new adventures career-wise, I will always consider the Coalition to be a vital resource in our community.