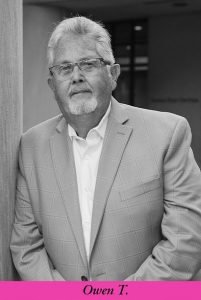 “I think you have breast cancer.”

I remember those words as the doctor reading my mammogram spoke them. I was in shock as I tried to comprehend. Me? A man with breast cancer? I was unaware men even got breast cancer!

My journey had started the month before, in March of 2002. My wife had noticed an inverted nipple and urged me to check in with my primary doctor. He sent me for an ultrasound and mammogram. I thought it was unnecessary but I went along with the appointments, never thinking it would amount to anything more than a cyst. Imagine my surprise.

Following a biopsy, mastectomy, and lymph node surgeries, I was referred to a medical oncologist. After an initial consultation, I decided to consult with a comprehensive cancer care center. That was one of the best decisions I have ever made, and 19 years later I still see the same oncologist and nurse practitioner. I credit them with the longevity of my battle.

Since diagnosis I have had five different treatments, 37 radiation treatments, and two additional surgeries. Just when I think something is working to tame the beast, another treatment stops working. Fortunately, my oncologist always has another option. His task became more daunting, however, as I was diagnosed with metastatic disease in October 2012. Every four weeks I have treatment and scans occur every third week. I have three tumors in my lungs, but thankfully the growth is small and slow.

In 2016, I saw an advertisement for a discussion on breast cancer to be given in my town which was sponsored by my NYS Senator and the Breast Cancer Coalition. With eight others in attendance, we were encouraged by the senator to tell our stories. When it was my turn, he asked if I came to support a female family member or friend. I think he was a little taken aback when I launched into my spiel about my fight, as a man, against breast cancer. While there is information out there about men and this disease, it is not as well known. That didn’t stop me from letting people know my story.

Shortly after that discussion, I learned about networking support groups sponsored by the Breast Cancer Coalition in a neighboring town. I join immediately, and later became a member of the Regional and Advocacy committees. I have been privileged to travel to Albany with other committee members to advocate for funding for the Coalition.

I am a man living in a woman’s world and yet I have been accepted as “one of us” in every Coalition group. I’m so thankful for the Breast Cancer Coalition for providing programs that have helped me understand my station in life. I have met many wonderful people who have made my life easier by showing me we are all in this thing together. I would be lost and floundering were it not for the information and support I have received through the Breast Cancer Coalition.