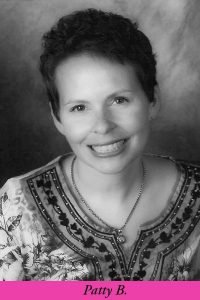 Patty Bellohusen didn’t have time for cancer. At 38 years of age, this busy registered nurse worked part time while taking classes that would lead to her Master’s degree. Life was hectic and her schedule chaotic when Patty noticed a lump in her breast.  “It was at the end of May 2012 when I found this and told the doctor,” she remembers. At her doctor’s suggestion, Patty scheduled her first mammogram.

In the waiting area of the imaging center, Patty spotted a copy of Voices of the Ribbon and began thumbing through it. Then she set the publication down and went to get some tea. Finally, after a long day of imaging and a biopsy, she went home to await the pathology results.

The phone call came a few days later. As she listened to the words “You have breast cancer,” all sorts of emotions competed for her attention. “It was shocking, to say the least,” Patty observes. “It revved up my anxiety and I was moving ahead of the game, not focusing on one thing right here and right now.”

Her husband, Mike, her family and friends, and the Coalition, bolstered Patty through this time. “It was very helpful telling people what was going on because it gave me such support,” she remembers. At the Coalition, Patty was able to connect with others who had faced their own diagnoses and found their way through. She joined the Brown Bag group when she was able, and connected with a couple of PALS mentors. With her support system to uphold her, Patty put together her medical team and made the decisions that enabled her to move forward.

Patty and her doctors decided that her best surgical option was a bilateral mastectomy with reconstruction. One of Patty’s PALS mentors had undergone the same reconstructive procedure and shared her experience, along with some practical tips to help during the post-operative time.

With her surgical decision made and the date set, Patty had time now to reflect on how frenetic the days since her diagnosis had been. She observed it would have been best to take little sanity breaks here and there. “Breathe,” she advises others who may be in a similar position. “Just take a little time and some deep breaths and sleep on something overnight if you need to.” This realization enabled her to move forward with less stress and more clarity.

With her newfound perspective in place, Patty underwent her surgery. Afterward, she began a three-month course of chemotherapy. She found the evening support groups at the Coalition invaluable as she faced some physical and emotional side effects of this treatment that challenged but did not defeat her.

As her cancer was found to be responsive to hormonal therapy, Patty began a course of Tamoxifen. In addition, she underwent several procedures to revise and complete her reconstruction. “It took a while to get used to my new body image, my new ‘me’,” she shares, but she is moving onward with confidence and a renewed sense of who she is in this world.

Patty has now completed her Master’s degree and holds position of responsibility – one that she loves – in a local health care facility. And she has become a beloved, smiling face in the Coalition’s community of survivors.