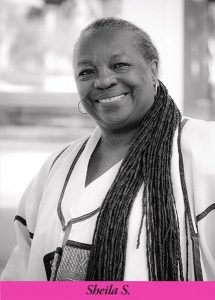 As I tell you about my journey, I need to share with you my belief system so that the “data” will make sense. I firmly believe in a Creative energy in the universe.  As Spiritual Beings having a Physical existence, I met with the Creator and agreed with the plan of this life to participate in experiences so that I would learn and grow spiritually.

In the spring of 2015, I had my normal annual mammogram.  I did not think anything of it.  I received a call that they wanted me to return for an ultrasound and biopsy.  It still did not sink in.  Once the results were in, I found out I had a small lump in my left breast.  My response was, “OK, let’s get it out”.  I was dealing with my lump the way I encouraged my husband to deal with his testicular cancer.  After all, we were retired and still had a lot of loving and living to do.  We were not going to let this stuff stop us.

My surgeon was a wonderful woman.  She explained everything to me in plain English not “Doctor speak”.  The good news was the lump was very small and there was no cancer present in my lymph nodes.  After surgery, my oncologist found that my cancer was hormone sensitive.  He recommended radiation and taking an oral med called an aromatase inhibitor.  By that point, I had taken part in Spiritual cleansing and meditation.  Several of my friends brought me homeopathic herbs to take and I took them along with the meds.  Early that fall, I was one of the support facilitators at a retreat held on the Pine Hill Reservation in South Dakota.  They were aware of my diagnosis and ask if I would like to participate in a Native Healing Ritual.  I did.  Nothing magical happened.  I finished the treatment and medication.

A friend gave me the address and the day and time of a group held at the Breast Cancer Coalition.  Now I am used to being the only African American in groups, but I said to myself “oh no, here we go again”.  I was not sure whether the group was right for me.  I had the surgery two (2) years earlier, so why did I need this group?  But I found the women to be warm and welcoming. I continued to participate in the group for about a year and a half.  And then my husband died May 30, 2018.  That was worst day of my life. My cancer experience was a walk in the park compared to this.  We had agreed to do “this life thing” together. Now I was alone.  He died on a Wednesday and my Coalition group met on Thursday.  Other than family, this group of women were the first to know.  They held me up through this process.  Then in September, I had a light stroke.  I was lucky because I paid attention to the signs and my niece is a BSN.  So she and her mother made sure I got to the hospital quickly.  Again the Coalition group was very supportive.

As with many medical issues and sudden death, there were devastating effects on our finances.  Our landlord generously cut the rent in half. But I was still full of fear and did not know if I would be able to get through the holidays.  I’m not talking about presents and dinner.  I’m talking about RG&E, rent and food.  I was open about this with my Coalition group.  They encouraged me to look into resources available to Senior Citizens and encouraged me to look for a job.  I did not think anyone would hire me at my age.   The last meeting before the holidays, my Coalition ladies gave me an envelope.  When I looked in it, all I could do was cry. Thanks to them I got through the holidays.  I did not qualify for any of the Senior resources but I did get a job.  It was the kind of position that was designed for me and my background. I now work for a non-profit that supports those who are struggling to recover from mental illness and substance use disorders.

I continue to participate in the Coalition group and give the women the support I receive.

In short, IT IS MY TURN TO GIVE WHAT I HAVE RECEIVED.  I am living my lessons as a Spiritual Being having a Physical existence.