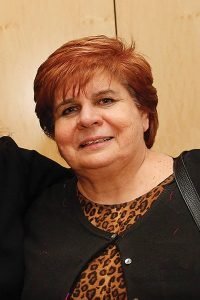 Here at the Coalition, our programs are open to all survivors of breast or gynecologic cancers. But a few who turn to us are affected by both. Silvia is one of them.

Silvia was blindsided by her breast cancer diagnosis in May of 2018. She was found to have ductal carcinoma in situ (DCIS), a very early form of the disease, which affected a wide area of her breast—eight centimeters, to be exact. She and her surgeon determined that a mastectomy was her best surgical option.

“Probably the biggest shock for me was being told that I had to lose my right breast. I took a little time to accept that, and to envision myself without a breast. I was also thankful that the cancer was discovered at such an early stage,” Silvia reflected, and credits her diagnostic radiologist for doing ”an amazing job” of zeroing in a cancer that was difficult to detect. Estrogen was determined to be a growth factor in her cancer, so when the mastectomy area healed sufficiently, Silvia began aromatase inhibitor therapy; a daily dose of an oral medication to lower her levels of that hormone.

Shortly after her diagnosis, Silvia turned to the Coalition and became a regular at the Brown Bag table. And, in January of 2019, she attended the PALS Mentor training session; she was ready and willing to reach out to others on a similar path.

But just a few weeks after her training, Silvia noticed some vaginal bleeding. She set up an appointment with her gynecologist. “He did a biopsy, which did not reveal much,” Silvia recalled. “However the technician felt that not enough sample was submitted to make a proper diagnosis. The doctor then performed a D and C, which revealed endometrial cancer.”

A month later, Silvia underwent a complete hysterectomy. Her pathology report showed her disease had been completely removed with clear surgical margins; her doctors would follow up with her carefully but no further treatment was needed. By this time, it was May of 2019, one year after her breast cancer diagnosis.

Although Silvia’s endometrial cancer diagnosis was a double-whammy, she found her recovery from her hysterectomy – a laparoscopic procedure – to be more straightforward. “After a few days, I felt well enough to walk around the block. I only have five little incisions on my belly, I can hardly see them,” she shared. Her emotional recovery, however, was more challenging. “I think I found the second diagnosis more scary. After the breast cancer I thought I was done receiving bad news! [But] it does not stop me from living my life on my own terms.”

“At the end of the day, I enjoy my life more now than I did back then when I was cancer free,” Silvia continued. “Too bad that it took cancer to get me here!”