Living with Gynecologic Cancer: Brenda A.

My Enemy and My Ally 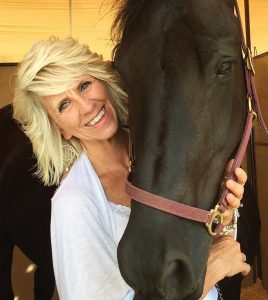 The first test result found its way to me, unannounced, unsettling; not unlike tests I took in school. I was frightened and could not breathe while awaiting the results. Then came these words: “You have a large tumor on your right ovary.” The administrator who called me to deliver the news spoke deliberately, made the referral to a surgeon and, I expect, went on to the next call while I remained frozen in time. “Wake up!” I thought. “This isn’t a dream.” A page in my life story turned and everything I knew to be true was gone in an instant, in a phrase from a voice over the telephone in the middle of my normal work day.

The following days were a blur as I navigated a maze of highways, elevators, exam rooms, surgery schedulers, surgeons, nurses, check in / check out administers, patient portals, and (with only a handful of sick days over a 30-year career) filling out disability forms. Then there was the introduction to something called CA125, which I quickly learned is a blood test for a cancer marker. After all this, I had a complete hysterectomy; my diagnosis was

Next came the question: chemotherapy, yes or no? It was my decision. Enter doubt. Enter trying to find someone, anyone, to tell me I didn’t have to do this, while I knew in my heart I had to. This was spiritual warfare but it led me to make the voyage on Thanksgiving Eve 2017 to Roswell Park Cancer Institute, where a third opinion was delivered by a physician that did not know ‘me’ but has a relationship with this disease and understands it motives and characteristics. She looked me in the eye and said, “You have to do this. Yes, you are going to lose your hair, but you’re fighting for your life.”

Okay, turn another page and here we go! It’s no coincidence I found myself at Sands Cancer Center. I had a relationship with the ‘angels’ there, from previous years, as I sat at the side of my mom as she received chemotherapy for her own diagnosis of lung cancer.

I often find life’s truths in its valleys, and my walk with cancer has given me space to understand what matters most, as well as the courage to share my story. It started with a phone call introducing an enemy, but as it played out, that enemy introduced me to an ally.

That introduction came with the force of a revelation one early winter morning, four months after my hysterectomy and at the start of chemotherapy. While lying in bed, I heard my sweet dog Steely coming to gather me up for her first outing and breakfast. As I crawled out from under the covers, I realized I had taken my nightcap off, exposing my now-bald head, still so unreal. Downstairs I went in a ‘This Girl Can’ nightshirt to find the wood stove needed to be filled, so I slipped on my barn boots. Yes – a nightshirt, barn boots and a bald head! Outside, the stillness washed over me, and for the first time in a long time, fear was not in control. As I stacked firewood in the crux of my arm, I could hear the sound of wood against wood echoing in the gorge near my home. Loaded up, I took a deep cleansing breath and turned to carry the wood in. As I reached the glass door, there it was, the reflection of ‘Brenda’. Without the thick blonde locks that once defined her, she was still there, strong and able. I realized I am so much more than what I look like. “Inside Out Living Life Beyond the Surface” was born out of the love that was present with me, filling me with peace and trust.

Today, I navigate a three-month surveillance cycle, making ‘hope deposits’, so when the fear comes – and it will at each blood test and mammogram – I can make withdrawals and balance myself. The lessons in the valleys are the means to the celebrations on the hilltops, and today I celebrate being here, knowing that we are so much more than what we see in the mirror. Today I choose to be a messenger of what matters most, and the view from this diagnosis is one of clarity in all the small moments of this life. I am grateful today.