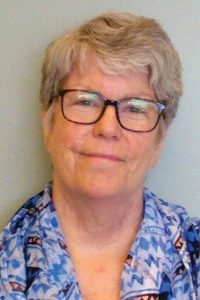 When Micky went for her annual physical exam In November of 2017, she had been experiencing abdominal bloating but wasn’t concerned. “Honestly, I didn’t think anything of it,” she recalled when we met recently to talk about her walk with cancer. She remembered feeling taken aback when, a couple months before her physical, the Physician’s Assistant at her gastroenterologist’s office noted the bloating and asked if she had seen her gynecologist recently. Micky had, in fact, seen her OB/GYN six months earlier and all appeared to be well. But when her primary care doctor discovered an abdominal mass during her exam, she referred Micky back to her gynecologist, who promptly ordered a CT scan.

“That was the first time I heard the word ‘oncologist’ mentioned,” Micky remembered of that consultation. “I barely remember the conversation. I remember being kind of frozen and taking notes — sort of. I just wrote down key words like ‘large’; ‘concerning’; ‘oncologist.’“ It was difficult to process the possibility of cancer.

When her gynecologist called with the scan results, “I was at work taking this phone call,” Micky shared, “and was walking everywhere because I couldn’t possibly sit down and have this conversation.” By all appearances, her doctor concluded, the mass seemed to be cancer. But surgery would be required to confirm the diagnosis and an appointment was promptly scheduled with a gynecologic oncologist.

Two weeks later, Micky underwent the needed surgery. As her doctors predicted, the pathology on the mass showed it was, indeed, cancer: stage IIIC ovarian cancer, to be specific. There were abdominal tumors present as well, but the disease had not spread beyond that point. Despite the unwelcome news, learning that that her disease was localized to the abdominal area alleviated some of Micky’s fear. “I felt a little absurd for feeling so relieved,” she confessed. But the emotional toll of her diagnosis was still heavy.

Her sister had traveled from her distant home to stay with Micky during her recovery. “I’m glad she was there, because even though I was kind of prepared for [the diagnosis], it’s still a feeling like the floor’s falling out from under you and at the same time, the ceiling is falling on top of you. It’s like I was being crushed…and all I could really think about was, ‘Am I going to be okay?’”

Fortunately, Micky’s care team ensured she had a strong safety net in place. “My doctors knew exactly what they wanted to do, which was very reassuring,” she noted. “I was relieved that the ball got rolling really, really quickly.” As soon as she had recovered sufficiently from surgery, chemotherapy to shrink the tumor began. After a few months, Micky took a break from this regimen to allow for a complete hysterectomy and recovery from that surgery. This was followed by more chemotherapy, which ended in June of 2018.

With chemo behind her, a few inoperable tumors still remained, so Micky enrolled in a clinical trial involving treatment with two medications. ”So far, my scans have been good,” she said with a smile. “Whatever these drugs are doing, they seem to be working very well… you can barely even see [the tumors] any more on the scans.”

Follow-up appointments, scans, and medications have outlined a new way of being for Micky. “It becomes a rhythm, it becomes a routine, and it’s your new normal,” she acknowledged. Still, she has found plenty of space to add color and life to that basic outline. She attended Women’s Wellness, a weekend oncology retreat sponsored by Camp Good Days. During this nurturing experience, Micky befriended two regular participants in the Coalition’s Common Ground group for those living with metastatic disease; one of her new acquaintances shared a similar diagnosis of ovarian cancer. “I had no idea that BCCR also included women with gynecologic cancer,” Micky said. Her two new friends “…radiated this gratitude and peacefulness about [the Coalition] when they talked about it.” Her interest was piqued. But it wasn’t until after she retired at the end of 2018 that Micky was able to join the group at the Common Ground table. “I really am very thankful for that.”
Micky adds her warm, supportive presence to the group which, balanced with her sense of humor and spirited approach to life, has brightened the day for many of her fellow Common Ground “Peeps”, as they refer to themselves.

And we at the Coalition are thankful that Micky found us!