One Diagnosis, Two Lives in the Balance

The year 2011 began with joyful news for Heather and her family. With two young daughters to keep her hands busy and heart full, she and her hu 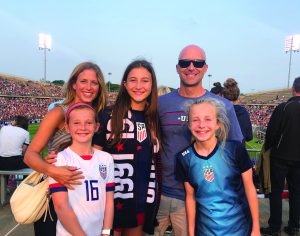 sband, TJ, were overjoyed to learn a third child was on the way. Ten weeks into the pregnancy, she saw her obstetrician for the first prenatal exam. “I remember going into the visit hoping to hear the heartbeat,” Heather reflected when we talked by phone about her experiences during that pregnancy. “I knew it was probably a little too early for that, but I was hoping.”

However, Heather detected a shift in her obstetrician’s manner during her breast exam. “This was my third child and he had been my doctor for a long time. I knew something was wrong.” Concerned about an area he noted during the exam, the doctor referred Heather to an imaging center for an ultrasound. This was followed by a biopsy. By the time these procedures were scheduled and the pathology results became available, a week and a half had gone by. The results confirmed Heather’s worst fears: she was diagnosed with breast cancer.

“I’m sure it’s always hard receiving this kind of news,” Heather shared. ”But for me it was jarring. It came out of nowhere.”

Heather received a referral to a breast surgeon, who made arrangements to see her the very same day – after hours. This compassionate caregiver reviewed Heather’s pathology report, took into account her young age – she was thirty-three at the time – and reached a conclusion that would be confirmed during a separate consultation with a medical oncologist: chemotherapy would be needed after surgery.

To safeguard her growing baby, Heather’s caregivers recommended waiting until she was out of the first trimester of pregnancy before proceeding with any treatment. It was only a three-week wait until surgery. “It was a long three weeks,” Heather recalled. During the interval, she underwent a series of scans of various areas of her body to be sure the cancer had not spread beyond her breast. This resulted in welcome news: there were no obvious traces of cancer anywhere else.

Heather’s surgeon recommended a lumpectomy – also called a partial mastectomy – to remove her tumor and a margin of healthy tissue surrounding it. “After the surgery is when we found out the cancer was triple negative,” Heather shared. Triple negative breast cancer, a subtype of the disease that represents about ten percent of all cases(1), does not carry three common biomarkers that represent targets for treatment: estrogen receptors, progesterone receptors, and a cellular growth factor called HER2. However, triple negative disease generally responds well to chemotherapy.(2)

“I was very, very worried about going through chemo when I was pregnant,” Heather acknowledged. To allay her fears, she consulted with oncologists at MD Anderson in Houston, Texas, who have treated a large number of pregnant women with breast cancer. Those conversations brought reassurance; as counterintuitive as it might seem, many forms of chemotherapy are safe to undergo during pregnancy. With her mind eased in regard to her growing baby – a little girl, as Heather soon learned – she focused on her two older daughters. “The girls were really little. They were four and one-and-a half. My goal for them every day when I was in treatment was just to have life be as normal as possible.”

At the time of her diagnosis, Heather was already familiar with the Coalition. “I had actually run in the Pink Ribbon Walk and Run a couple times previously.” She called the Coalition and scheduled a BC101 session. “I met with Holly [Anderson] and I was like a walking zombie at that point. I was in such a haze – it was all totally overwhelming to me. And [Holly] was so nice, so upbeat. I remember thinking, ‘I don’t even know what to ask for.’“ Heather was soon connected with a PALS mentor who had also undergone chemo while pregnant. It helped to know she wasn’t alone in this.

Ultimately, their experience with the Coalition opened new doors for Heather and TJ. “I remember him saying that we’re part of a whole world we never knew existed before. It’s true. I talk to people about the Coalition all the time because it’s a great place to go. It’s a home base, if you will.”

After signing up for a session of Gentle Yoga, Heather felt even more at home. “I looked forward to it all week long. I loved it. I could take my hat off and go bald and I didn’t have to worry about it.” Instead of the pity she often encountered in public, Heather could relax among kindred spirits who understood and supported her. “That was huge,” Heather affirmed.

By the time she finished chemo, which consisted of eight infusions administered every two weeks, Heather’s pregnancy was near term. Three weeks later, after a scheduled induction of labor, she and TJ welcomed their daughter, Molly, into the world. “She was born perfect. There were no complications with her at all,” Heather shared, and continued. “After she was born, I felt like a million bucks. I felt like I was ready to run a marathon – today! The nurses said, ‘Take it easy,” and I knew they were right. But I felt great.”

One week after Molly’s birth, Heather underwent a PET scan – a form of full-body imaging that could not be done during the pregnancy. “That was hard because I had to stay away from her for a whole day.” But the results were worth the hardship; no trace of cancer was found. A few weeks afterward, she began a six-week course of daily radiation treatments, which ended as the holiday season began. “I went for my first prenatal visit at the end of January and finished radiation at the end of November. “ 2011 had been quite a year for Heather and her family!
“In February of 2021, I celebrated the ten-year anniversary of my surgery – my free-of-cancer day!” Heather exclaimed, then continued. “We always say that Molly saved my life – and she did. What if I had never gone for that first prenatal visit?”

As our conversation drew near an end, our talk turned to the unexpected gifts that can come in the wake of hardship; gifts that help us find our way through when things seem impossible. Heather reflected, “I would say cancer offered the gift of humility to me. I don’t know if that’s the right word to use, but it made me pare down things in my life, as far as what’s important and what isn’t. I found that when I just simplified things, it made it more manageable, if that makes sense.”

That made perfect sense to me, as did her thoughts on her relationship with TJ. “We were always close but afterward, we became one unit. He was definitely, definitely my rock. I’m thankful for him every day. Looking back, I cannot imagine how hard it must have been for him. But, he was so understanding and so strong for me. I absolutely could not have done it without him.” Heather reflected further, saying, “My mom, too. She and TJ were my pillars of strength. They still are!”

Life has long since returned to normal for Heather and her family. “Right now, my girls are fourteen, twelve, and Molly is ten. They all play travel soccer, travel lacrosse, they swim – they are busy. These days, we travel a lot for them. That’s about it – it’s kind of boring. Honestly, it’s great! It really is.”