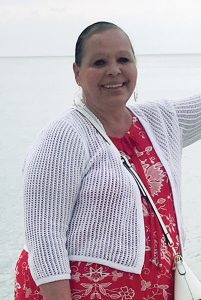 Her story begins, as many do, when she found a lump in her breast. It was late February, 2016. Joanna acted quickly and scheduled a mammogram in early March. However, the imaging didn’t reveal anything unusual, and neither did a follow-up mammogram a few weeks afterward. But the lump was still there. So, at her third mammogram, Joanna underwent a biopsy that confirmed her worst fears: she was diagnosed with breast cancer. By this time, it was May. But her memories surrounding these events are vague, so when Joanna and I met to talk about her walk with breast cancer – and her extremely rare reaction to the disease – she was accompanied by her mother, Kay, and sister, Stephanie.
Joanna was living and working in Niagara Falls at the time. “My life was good,” she recalled. But even before the diagnosis came, her family noticed changes in her behavior.

“She kept calling and telling me over and over that Prince died,” her mother shared. Each time, Joanna seemed to be relating the news for the first time. “And I mentioned to Stephanie, ‘I think your sister is having a nervous breakdown.’”

After her diagnosis, Joanna and her mother consulted a neurologist who concluded that stress was the cause of her memory difficulties. It seemed a reasonable conclusion; psychological stress is a well-known reaction to any cancer diagnosis. After their visit with the neurologist, the pair went to lunch. “That doctor seemed very nice,” Kay offered. Joanna responded, “What doctor?”

This was a defining moment for Kay who, along with Stephanie, lives in the Rochester area. “We weren’t with her every day to see this,” she explained.

Having consulted a surgeon and plastic surgeon, Joanna scheduled a bilateral mastectomy with reconstructive surgery. However, she does not remember making these plans. A friend flew into town to stay with Joanna during her recovery. Shortly before the surgery date, Joanna, Kay, Stephanie, and her friend planned to go out for breakfast. But, due to Joanna’s increasingly unexplainable behavior, they went instead to the emergency department of a Buffalo hospital, where she was admitted.
In the hospital, Joanna’s condition continued to deteriorate. Multiple medical tests did not reveal the cause of her symptoms and, as time passed, her mother and sister grew weary of their daily commute from Rochester. They had Joanna transferred to Strong Memorial Hospital, where an astute resident suggested a possible explanation for her puzzling symptoms: paraneoplastic syndrome. This extremely rare condition, which affects less than one percent of cancer patients*, results from an immune response to the presence of cancer in the body; its symptoms vary widely among individuals affected. In Joanna’s case, her syndrome caused encephalitis, or inflammation of the brain.

A diagnostic spinal tap was done, and during the two-week waiting period for results, Joanna slipped further from her overwhelmed and frustrated family members. Unable to perform basic functions, including feeding herself, Joanna described feeling in a dream-like state. “I could hear my family speak,” she said. “I could hear the doctors, but I couldn’t always respond to them. And when I did, my speech was slurred. But in my mind, I was holding a conversation.”

When the spinal tap results confirmed the presence of paraneoplastic syndrome, Stephanie began reading about the condition. She learned that treating the cancer would offer the greatest hope for Joanna’s recovery and insisted the surgery take place as soon as possible. Joanna soon underwent a single mastectomy with no reconstruction; removing the tumor took priority. Shortly afterward, chemotherapy treatments began. And at last the tide began to turn for Joanna.

“After about two weeks, I could say little words,” she noted. Her progress was slow but steady. “As I got better, I started realizing they were saying, ‘You have cancer.’ And I thought, ‘What? I have cancer?’” It was difficult to come to terms with, and as Joanna made her way along an uneven road to recovery, a thought sustained her: “Just get me home.”

Finally, four months after she entered the Buffalo hospital, Joanna went home. In need of assistance with daily tasks, her home was now in Rochester with her mother. Most heartbreaking to Joanna are lost memories of her three children’s childhoods; memories she has yet to recover.

But Joanna was – and is – determined. She began attending a cancer support group in Rochester, where she befriended a frequent Brown Bag attendee who told Joanna about these weekly survivor gatherings at the Coalition. Joanna and her mother joined the group one Friday, and after that, Joanna continued attending on her own. She is now a beloved member of the Coalition’s survivor community and has mentored others newly diagnosed with breast cancer.

About a year after her surgery, Joanna opted for prophylactic removal of her remaining breast. Reducing her risk of breast cancer – and the potential return of her paraneoplastic symptoms – was foremost in her mind. This time, she decided against reconstructive surgery. “I’m really comfortable with it,” Joanna said about her surgical choice, and is considering a tattoo over her scars to celebrate her “new normal.”
In early 2018, Joanna accepted a position in the Pediatric Specialty Division at Golisano Children’s Hospital. “Going back to work was a big deal for me,” she said. At first, there were job-related memory challenges to overcome. Joanna rose to the occasion; her warmth and compassion have made her a valued member of her team. “I couldn’t do my job without having gone through everything I’ve been through,” she acknowledged.

When asked what she may have gained through her experience, Joanna responded without hesitation: “Patience. You have to give yourself time to accept what has happened, what is going to happen, and what is going to be.”

“Don’t say ‘never’ at this point,” Stephanie chimed in. And we all agreed: never say never.