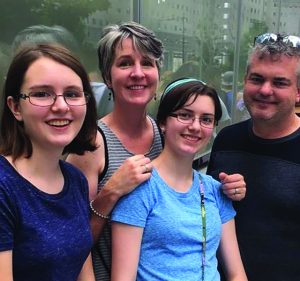 In the midst of her busy life as the mother of two young girls and a full-time teacher, Bethann was just 39 when she found a lump on her left breast. “It’s probably nothing,” she thought. Still, as a precaution, she scheduled a doctor’s appointment. After undergoing a mammogram, she learned the lump was a benign cyst, and happily went about her day to day life. From that point until age 48, Beth continued with annual screening mammograms and, due to her dense breast tissue, ultrasounds as well. Occasional small cysts were found and excised, and she always received the same message: all is well.

As time went by, little things happened that concerned her. When an aching shoulder and intermittent chest pain resulted in a cardiac evaluation, the results showed her heart was “ticking like a champ”. Beth also found herself more tired than usual, but wrote off her fatigue to the stress of working and parenting her teenage daughters. Most disconcerting to her was losing her appetite. Food no longer interested her; even the sweets she admits were her favorite. In hindsight, Beth believes these little things were messages from her body that something was wrong.

At her annual mammogram in March 2015, Beth spoke with the radiologist about the fact that cysts had occurred in the same area of her breast every year for the previous nine years. This discussion raised a red flag with the radiologist, prompting her to suggest a biopsy as a precautionary step.

The biopsy was on a Monday. Beth was told to expect a call on Wednesday night around 5:00 and to be in a place where she’d feel comfortable discussing the results. That Wednesday, she was at work doing unit planning with some of her colleagues when her phone rang at 5:30. Beth excused herself, saying she would be right back. Unfortunately, the radiologist shared that the biopsy showed invasive ductal carcinoma. Shocked, Beth hung up the phone and sobbed. She called her husband to let him know and tried to pull herself together. When she didn’t return to her coworkers, one of them checked on her and quickly ran to get another teacher who was also a breast cancer survivor. With the compassionate counsel of both these friends – and a box of tissues – Beth was able to get in her car and drive home.

As she drove, Beth tried to make sense of it all. Just moments before, she was planning the rest of her units and thinking about spring break. This didn’t seem possible. She became nauseated and had to pull over to the side of the road for a moment before continuing.

Beth and her husband wanted to get a handle on things before saying anything to their daughters. Her nurse practitioner encouraged them to not wait too long before sharing the news. So, after two days of scheduling appointments and beginning to form a treatment plan, Beth felt more comfortable fielding their questions and concerns. When the family gathered for a meeting, the girls knew it was serious. Beth’s husband said, “We have to talk to you. Your mother has cancer.” Their daughters replied, with some relief in their voices, “Oh! We thought you were getting a divorce!” Beth recalls laughing about it; the girls knew something was wrong and the worst thing in their minds was the thought of their parents divorcing!

After choosing a surgeon with whom she felt at ease, Beth underwent an MRI. This indicated her tumor was between two and three centimeters in size with no obvious lymph node involvement. She opted for a lumpectomy and a sentinel lymph node biopsy, feeling it was the least invasive option available to her. Unfortunately, the pathology results showed cancer in her sentinel node and the tumor was larger than the scans indicated. She was referred to a medical oncologist who recommended chemotherapy as the next course of treatment.

That suggestion made Beth nervous. She lives an active lifestyle and was unsure how chemo would affect her body. In a quest for guidance and support, Beth reached out to the Breast Cancer Coalition. She attended a Breast Cancer 101 session with so many questions swirling in her mind, she didn’t know where to start. She was met with support, a listening ear, and suggestions that empowered her to communicate clearly with her medical team about her treatment options.

Beth forged ahead with chemo, relying on several different anti-nausea medications to get her through. She also consulted a nutritionist and a naturopathic physician, who performed acupuncture treatments throughout chemo, and credits that approach with helping her cope with the side effects. Ultimately, chemotherapy was successful: the tumor shank.

After chemo, Beth felt confident in her decision to undergo a bilateral mastectomy with reconstructive surgery, which took place in November of 2015. Afterwards, the pathology results unexpectedly revealed her tumor actually measured six centimeters in diameter.

In January 2016, Beth was recovering and preparing for a second reconstructive procedure when her oncologist recommended a course of radiation treatments. Beth questioned this. She had two consultations with the radiology oncologist to discuss the benefits the treatment would have for her. She needed information. Beth confided to her medical oncologist that she was uncomfortable going ahead with radiation without data to confirm the possible benefits to her. This oncologist then consulted with her radiology oncologist. Together, they found studies that supported the benefit of radiation for Beth in her specific situation. This was the information she needed to support her decision, and Beth proceeded with radiation. Afterward, she went on to complete her reconstructive surgery. As an educator, having accurate information and doing her due diligence before making her decision was important to Beth.

A natural-born teacher, Beth actively seeks knowledge and is open to learning new lessons. Although she admits cancer is one of those tough, scary teachers you sometimes run across, it nevertheless made her sit up, pay attention, and learn. Before cancer, she feels she wasn’t ‘living’ life as much as she was ‘doing’ life. Cancer forced Beth to step back and reevaluate everything. As a result, she made a concerted effort to be more fully present. Acknowledging occasional lapses back into old patterns, she has learned to refocus and re-center herself. Beth now makes it a point to seek out things that bring her joy and to ripple out that joy to others.

At the Coalition, Beth found a safe, welcoming space with kindred spirits who understood what she was going through. After her active treatment was over, she had a strong desire to give back for all she had received through her journey. She attended Brown Bag Fridays, joined the programming staff for a time, and became a PALS mentor. Currently a member of our Regional Community Outreach Committee, Beth wants breast and gynecologic cancer survivors in regions surrounding Rochester to participate in the robust programming and services that were so helpful for her. For Beth, the Coalition rippled out hope by connecting her with people who listened when she truly needed to be heard.